A Weapon on Four Wheels

A Weapon on Four Wheels


The first report claimed 11 injured, and a baby in operation to save a leg.


UPDATE:  The 18 month old baby has lost one leg because of this attack.

Another report: Eleven people were wounded in a vehicular attack next to the the Chords Bridge at the entrance to Jerusalem on Monday [afternoon] morning. The attacker was shot dead at the scene. Eight people were taken to Sha'are Zedek Medical Center in Jerusalem, three of them in moderate condition, and six people in light condition, some suffering from shock.

Six were taken to Hadassah Medical Center in Jerusalem's Ein Kerem, five of them lightly hurt. A one and a half-year-old baby, who was moderately wounded and suffering an injury to his leg, was initially taken to Sha'are Zedek and later transferred to Hadassah in an effort to save his leg, where his condition deteriorated.


The next report said: 11 DEAD, and 14 injured including a baby.

This was corrected to read:  An Arab terrorist with Israeli citizenship was shot and killed near the Jerusalem Chords Bridge at the entrance to the capital after he rammed his vehicle into people at a bus stop around 3 p.m. (8 a.m. EDT).  Eleven civilians were wounded, including a seriously injured 18-month-old baby girl and a 65-year-old woman who suffered moderate injuries. Nine others were lightly injured.

And if he was not eliminated, he was prepared to use this on Jews: 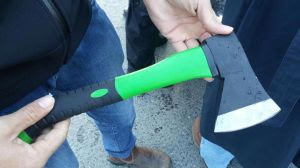 Because of the gravity of the attack and injured, the reporting came in fractured and lacking the true reality. It seems Israelis are becoming unhinged, as one can see from this video:

A palestinian driving his weapon on four wheels . . . causes such horrific damage
I find it very very hard to believe that the Mayor of Jerusalem, the Prime Minister of Israel, all the Members of Knesset, and the sweeping Security Establishment, cannot find a way to protect the Israeli citizens of Jerusalem?

While at the same time

While at the same time Jews are being stabbed, run over by speeding weapons on four wheels, massive shooting at cars on the roads, rocks the size of boulders being thrown at families with children ... AND ... the police, Shabak, and Defense Minister obsesses over Yehuda and Samaria Youth to placate Arabs in the Duma Affair. What they don't do is investigate the internecine fighting within that village that caused the death of that Arab family.

In one critical article: The Honenu legal rights group reported that the Shabak has begun harassing relatives of the suspects in the Duma incident, apparently in order to further pressure the suspects into confessing to a crime they did not commit. Three female family members of one of the suspects were interrogated on Friday for several hours by Shabak and police interrogators. They were released shortly before Shabbat and were forced to spent Shabbat away from home since there was not enough time for them to make it back {....} Honenu noted that interrogating family members in order to pressure a suspect to confess has been deemed illegal and the Supreme Court has banned using the practice against the families of Arab terrorists. Honenu also reported of another arrest on Sunday Dec. 6th of a married woman with two young children who lives in Kiryat Arba. She and one of her young children were taken by police. The reason for her arrest is not yet clear.

Residents in Hevron blame the Defense Minister and the regional commander for the lack of security. “They have misplaced morality. Instead of fighting against Arab terror tfocused on Jews, they focus on Duma.”

The Solution: “Expel Terrorists and their Supporters”

Yisrael Bramson, Assistant Head of the Kiryat Arba-Hevron regional council, in an interview with Hakol Hayehudi. He pointed blame at the regional commander Yariv Ben Ezra and the Defense Minister Moshe Yaalon.

According to Bramson, the solution is clear. “We must stop Arabs from passing freely and make the area sterile. This is the most basic solution in the world,” [....] “Throughout the area of the Tomb of the Patriarchs there are interactions between Jews and Arabs. Everywhere where Jews go, Arabs can go. The next terror attack is just a matter of time,” he warned. “We must separate Arabs from Jews.”

The unsupreme court runs the country but is still called a 'democracy'. Why is there no massive outcry from the public? It's a jewish state in name only.