Jewish Poverty Consuming Over a MILLION in Israel 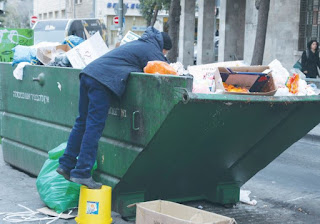 
According to the report (Latet’s Alternative Poverty Report) released Monday under embargo until Tuesday morning, there are 1,626,000 adults (30.2% of the total) and 998,000 children (35.2% of the total), living under the poverty line. The report determined that :

Because of this report, published in the Jerusalem Post Tuesday paper edition, the Prime Minister was quoted about what he has done to improve the lives of the poor. You will have to read that online or in the paper edition, as I will not support it here. There was a drastic increase in these figures because of the Knesset actions of the 2014 Yesh Atid party led by Yair Lapid.

*While, the NII report calculates poverty based on a person’s income alone, the Latet report uses the degree of a person’s shortages in five categories – each reflecting essential needs to live with dignity – to determine poverty: housing, education, health, food security and the ability to meet the cost of living.

A partial list of charities (I’m sure there are many more) where you can help alleviate the lack of food and necessities:

About Charity: Jonathan Rosenblum, Ultra-Orthodox Bring Pride, Charity and Vitality Back to Jewish People (2013) The Forward: “there are 200 or so free loan societies listed in our neighborhood directory for everything from medicines to bridal gowns to infant pillows for the bris.” [...] "” Israel’s child support allowances, niggardly by European standards, and its highly regressive tax structure (18% VAT) make it impossible to feed large families...." (what an unlikely place to find such a nice article)


Postscript:
An irreligious government that has robbed Israelis of their Jewish Heritage, does not allow Israelis to make a decent wage to support their families, and takes away money from Holocaust Survivors, cannot seem to pass legislation in their Knesset to GREATLY alleviate the poverty rampant in Israel? What does this say about the Zionist vision of Israel being a haven for Jews? Hypocrisy? Greed? Selfishness? Egoism?