Galactic Wars Fought From Earth – Not From Aliens in Outer Space.

WAS THE MASSIVE BLAST IN CHINA THE BEGINNING OF A NEW ERA OF GALACTIC WARS? What caused it? Who caused it? And how does this fit into the End of Days dialogue? What follows is my hypothesis, open for criticism.

Devash has stumbled upon an amazing object in the sky. Dialogue is centered on the planet Venus or another so-called Nirbiru. But they/we don't know for sure what it is. But it is eery. what was the timing of this in relation to the explosion in Tianjin?

*Her current project is about the Pope and the Jesuits who she writes is in a campaign to rule over the world and reek havoc among the nations. However Pope Francis "Gog", is coming from the hypocritical side of peace, all smiles and handshakes and hugs.

We also read about the French getting closer to announcing that they will recognize a Palestinian State. How they plan to actualize this we don't yet know. One thing we do know, the Palestinians are not exactly all smiles and handshakes! Not to mention the recent "Deal" that pivots Iran/Persia into greater aggression. Together all these powers moving in one direction but not necessarily in tandem, indicate we might be heading toward what the Zohar describes as a *series of wars to claim an absolute ruler of the world. At that point the ‘ruler and his gang' will turn toward Israel. [*Zohar Va'era and Zohar HaKadosh as mentioned by one commenter in response to “The Pope's Assassins and Saboteurs?” *link below]

We haven't really mentioned America yet.

23 Nations Around The World Where Stock Market Crashes Are Already Happening. Is the American Dollar next? The Telegraph writes, "Doomsday clock for global market crash strikes one minute to midnight as central banks lose control."

"Last week, China devalued its currency by 4.4%. Some say that the USA is so angry at China, that a covert war has started. The mega-explosion in Tianjin happened right after China devalued the yuan. An old CIA expression says that there's no such thing as coincidence. Did the USA sabotage Tianjin? China's Currency Devaluation and Geula"

Some are claiming that the recent explosions in China were set off by a "Rods from God".

Such a strange concept.

While other sites are claiming that an inordinate amount of cyanide was stored in the place that was stored in the place that exploded. Officials today said that at least 40 types of dangerous chemicals were detected at the blast zone, including 800 tons of ammonium nitrate and 500 tons of potassium nitrate, possibly causing the gigantic explosion. Some streets are covered with "white foam". Rain on China blast city raises pollution and contamination fears – ground water poisoned from a massive blast crater? What could cause such a massive crater?

What I find interesting in all this is first the timing of action then reaction. And second, the claim about the Pentagon (reacting?) with its Space Based Weapons. The "Rods From God" are estimated to leave a humongous crater like hole.

RODS FROM GOD
SPACE-LAUNCHED DARTS THAT STRIKE LIKE METEORS

A 2004 Popular Science article says "This technology is very far out--in miles and years. [They claim it won't actualize for another 15 years. 2004 was 11 years ago] A pair of satellites orbiting several hundred miles above the Earth would serve as a weapons system. One functions as the targeting and communications platform while the other carries numerous tungsten rods--up to 20 feet in length and a foot in diameter--that it can drop on targets with less than 15 minutes' notice. When instructed from the ground, the targeting satellite commands its partner to drop one of its darts. The guided rods enter the atmosphere, protected by a thermal coating, traveling at 36,000 feet per second--comparable to the speed of a meteor. The result: complete devastation of the target..." 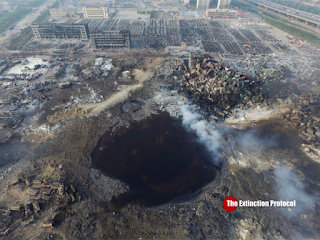 The end of days bloggers have painted a possible scene of outerspace meteors attacking the earth in a doomsday scenario. Knocking out entire countries. Imagine that this is actually describing a galactic war fought from on earth. However,

"The "U.S. Air Force Transformation Flight Plan," published by the Air Force in November 2003, references "hypervelocity rod bundles" in its outline of future space-based weapons, and in 2002, another report from RAND, "Space Weapons, Earth Wars," dedicated entire sections to the technology's usefulness (...) [but instead of from space, from earth on] rods atop intercontinental ballistic missiles, which would slow down enough during the downward part of their trajectory to avoid vaporizing on impact. ICBMs would also be less expensive and, since they're stationed on Earth, would take less time to reach their targets."

Did the USA sabotage Tianjin? Or, like Devash posits, this was the result of "The Pope's Assassins and Saboteurs?


Rods from G-d or another Sign from Shomayim in ELUL?

"The ruthless game of currency manipulation could continue (...) As Rabbi Brody puts it, [into] 'an impending economic disaster in the USA. This is all part of the Geula script, where Hashem wants us to put our trust in Him and not in the dollar.'"

Add this to the occurrences enumerated in G–D Gives Signs.

ADDENDUM:  Did you know that China has a Bilderberg-like group? This year, the Beidaihe summit started on Aug. 3, a week earlier than is the norm. Hong Kong’s South China Morning Post reported that the bump was due to China’s stock market meltdown, its economic cool down, and President Xi Jinping’s planned September visit to the United States. (This may be when they decided to devalue its currency to 4.4%. I wonder when their September visit is scheduled? 9/23?)
Posted by Neshama at 3:26 PM