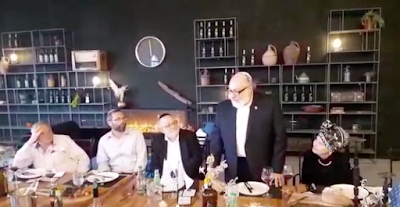 A screenshot of Jonathan Pollard speaking, but JPost cut it off midway for some reason, maybe political (likewise his comment that some of his words were not included in the Israel HaYom article. Does this free man sound political? After all these years, is the govt. afraid of him?)

Former Israeli spy Jonathan Pollard made his first public address recently, during a gathering of the Eretz HaKodesh movement in the town of Psagot, north of Jerusalem.

The event was held in honor of Eretz HaKodesh founder, Rabbi Pesach Lerner, a staunch advocate of efforts to secure Pollard’s release from prison.

Pollard attended the event with his wife, Esther Pollard, and asked to make an address to those in attendance, including Binyamin Regional Council chief Yisrael Gantz, Chairman of the Executive of the World Zionist Organization Yaakov HaGoel, Jewish National Fund Chairman Avraham Duvdevani, and JNF deputy chair Shlomo Deri.

During his address, Pollard called himself a “soldier” for Israel, and described the difficulties he faced during his lengthy imprisonment.

“When Yaakov HaGoel gave me the flag, it reminded me of my first visit with Ron Dermer in our New York apartment, which was about as big as that table, and I gave him a flag that I had kept for 30 years, an Israeli flag. And if you know anything about American prisons, I had to fight for, physically, fight to keep, because it was the one shred of connection that I had with this land.”

“I told Ron at the time that I felt like a soldier that had kept the regimental flag, in spite of defeat, and was able to pass it on, in purity and honor to my commander which was Bibi.”

“So now I find myself in Psagot. This is the land that I fought and bled for. I remember very well, I don't know why they decided not to talk about this in the Israel Hayom article, it might have been for political reasons.”

“But I wasn't treated very kindly, my back was broken and my ankles were broken in interrogation, and when they were doing this the only thing I could think of at the time was ‘Thank you’, thank you to Hashem for giving me the opportunity not to surrender to our enemies. Because I understood very well what was at stake in the interrogation.”

“I didn't do anything extraordinary, because each and every one of you individuals, who were living in this land right now exhibit exactly the same kind of decency and bravery and heroic attitude towards life that I tried to emulate the best as I could under those circumstances. I said thank you to Hashem because I didn't know frankly if I was going to give in to stop the torture or to continue with it. And I just decided to continue which got them even angrier.”

“So here we are 36 years later and I am looking at...This is the land, this is it. That all that torture was for. If for nothing else the Goyim understood that there was at least one Jew outside Israel that was comparable to each and every one of you and that's what scared them. Many years later, when my brother, Pesach Lerner was starting ‘Eretz HaKodesh’. I remember talking to a lot of rabbis in Boro Park about joining the movement which was very dangerous.”

“And they gave me the opportunity to talk for a few minutes because what I had gone through and there was a lot of resistance to what Pesach was doing and I tried to remind them that the first Zionist, the very first Zionist was Avraham Avinu in Lech Lecha. And that didn't get him any allies either, unfortunately at the time.”

“We shouldn't be ashamed at all to say loudly and clearly, ‘This is our Land!’ And when you drink this wine, we are drinking 2000 years of blood, sweat and toil. Hoping and praying for our return to this land...and here we are. So I say in conclusion, after 36 years, l'Tiferet Hashem b'Yisrael.”

For sure they will try to censor him. I remember clearly that upon the news of his possible release, Livni said only that "we'll need a way to keep him quiet." I hope he speaks and speaks and speaks!

We are waiting for him to say some GEULA MESSAGES, as Rav Dov bar Leib believes.