JONATHAN POLLARD “The JOSEPH of our time . . ."

JONATHAN POLLARD, THE ‘JOSEPH OF OUR TIME’, DEDICATES TORAH AT JOSEPH’S TOMB: HERE’S THE MESSIANIC IMPLICATIONS

"The first stage of the Messiah comes from the House of Joseph," Rabbi Berger told Israel365 News. "By preventing Jews from praying at the site, the Arabs are delaying the completion of that aspect of the Messianic process, which is the practical settling of the land of Israel."

The action was deep with spiritual significance with rabbis noting the connection between Pollard’s release, Biblical Jospeh, and the final Redemption of Israel. “I feel a very personal connection to this place and to the righteous Joseph who is buried in it and everything he went through,”  Pollard said at the event. “I am bringing this Torah scroll to Joseph’s Tomb; a Torah scroll written from prison specifically for Joseph’s Tomb, so that in this way, if it is not possible physically then spiritually and mentally we will settle all of our land.” […] 365news 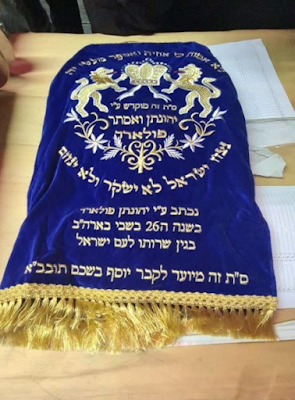 JERUSALEM (VINnews) — For more than 30 years, while in his prison cell, Jonathan Pollard dreamed of returning to Israel. However Pollard also set aside money each month in order to donate a Sefer Torah which would be presented in Israel. The Sefer was written a number of years ago while Pollard was still in jail. On Monday, Rosh Chodesh Iyar, Pollard realized his dream and donated the Sefer Torah to the tomb of Joseph in Shechem.

Pollard entered the Tomb of Joseph in Samaria last night, accompanied by his wife Esther,  the head of the Samaria Council Yossi Dagan and Tzfat chief rabbi Shmuel Eliyahu, whose father Rabbi Mordechai Eliyahu visited him while he was in jail, as well as activists who fought for his release for many years.

During the event Pollard said that “I feel a deep personal connection to this place, to Yosef Hatzadik who is buried here and to all that he went through. I bring this Sefer Torah to Yosef’s Tomb, a Sefer Torah written while I was in jail specifically for Yosef’s Tomb. When I was in jail, the jailors would humiliate me and ask if I thought I would ever arrive home. I used to ask them, “Do you believe in G-d?” and many would say they did. Then I would ask: “Do you believe that G-d can make miracles?” and they would say: “Sure.” And here I am.

Yossi Dagan said that “like Yosef Hatzadik our brother Jonathan was in a pit because he stood up for his values. Like Yosef Hatzadik your values lead the people of Israel. Your arrival here to dedicate the Sefer Torah is also a statement of our duty towards Yosef Hatzadik, who must be redeemed from his captivity by restoring our control of the tomb and bringing the flag of Israel over the tomb of Yosef.” 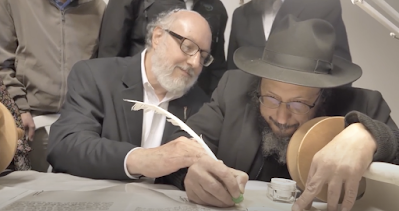 UPDATE:
The scribe is Moshe Flumenbaum, the owner of HaSofer on rehov Strauss. While I was in the Mercaz Klita during my first aliyah to Eretz Yisrael, Moshe’s family was also there, and I spent many a Shabbat with them. There were many other families that I knew then who are still in Israel.

So if you need a good Sofer, pay him a visit.

Yes, Daniel, that is the point. Yehonatan Pollard IS very likely the Gilgul of Yehonatan ben Shaul. Rav Mordechai Eliyahu zt"l thought so so much that he added the Hey to Yonatan's name making him Yehonatan. My home in Binyamin is less than one or two kilometers from Wadi Yonatan or Wadi Yehonatan where Yehonatan and his armor bearer walked through the Wadi to climb a cliff toward a plateau adjacent to Geva Binyamin where he and his armor bearer took on an entire Philistine garrison at Michmash. He told his bearer of arms that if the Philistines beckon for them to approach, then HaShem has delivered the Philistine garrison into their hands. It was at that point when Yehonatan was walking through the Wadi when the text of Tanakh adds the Hey in his name for the first time. Several years ago Rav Shmuel Eliyahu was invited to come down from Tzfat to dedicate an overlook of the Wadi and Migron on the adjoining hill in the name of his father called Mitzpeh Eliyahu who had visited Yehonatan Pollard in prison for many years at least twice of three times per year while Pollard languished in prison. The overlook was dedicated in his father's name BECAUSE he knew that Yehonatan Pollard, suffering for decades, was the gilgul of the spiritual soldier of G-d, Yehonatan ben Shaul as he walked through that very Wadi.