Operation Gotham Shield, an exercise involving FEMA, Homeland Security and a myriad of law enforcement and military agencies and which simulates a nuclear bomb blast over Manhattan, is set to conclude. 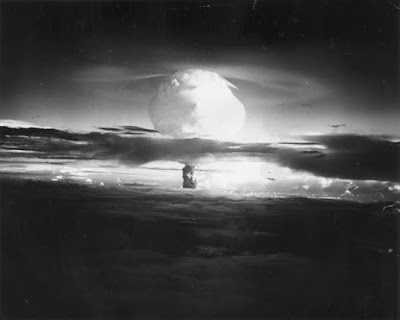 Then, as we learned earlier, April 26 is also when the entire Senate will be briefed by Donald Trump and his four top defense and military officials on the situation in North Korea at the White House, an event which Reuters dubbed as "unusual."

April 26 is also when the USS Carl Vinson is expected to finally arrive off the coast of the Korean Penninsula.

Now, in a statement from the Metropolitan Washington Council of Governments, the regional association reports that "law enforcement officials and other first responders will participate in a full-scale exercise on April 26 designed to prepare for the possibility of a complex coordinated terror attack in the National Capital Region.”

The exercise will be conducted across a widespread geographical area. According to the release, the regional exercise will be staged at six sites in the District of Columbia, suburban Maryland and Northern Virginia, and will involve hundreds of police, fire, and emergency medical service personnel and volunteer actors.

The is scheduled to take place near or at George Mason University, and last from 8:30am until 4:30pm.

The statement also advises that the only media availability will be in a one hour block before the exercise, from 7:30am - 8:30am on April 26.

Read more here at: The Gothamist – A host of federal and local agencies began conducting nuclear response drills in the New York and New Jersey area on Monday as part of a four-day long FEMA-led exercise known as Gotham Shield 2017. The drills, which are theoretical and do not involve actual volunteers posing as victims (au contrare), will simulate a scenario in which a 10,000 ton improvised nuclear device goes off on the New Jersey side of the Lincoln Tunnel, FEMA spokeswoman Lauren Lefebvre told Gothamist. MetLife Stadium will serve as the primary response center, and the event will be "focused on interagency and multi state coordination during a nuclear incident,"

You may also like to view https://youtu.be/4KD5209haQU, from which is a screen capture (notice the two countries highlighted). The screen shot is from a TV Show called JERICO (?). What do you make of this?

IF ANYONE IN NY HAS A FIRST HAND EXPERIENCE OF THIS, PLEASE COMMENT HERE.