The Future Of The World And Israel – Spotlight Pittsburgh

What Happened in Pittsburgh, Pennsylvania, on Shabbos Parshas Vayera


THIS COULD BE FAKE NEWS  NOT FAKE In the same Parsha of Vayera, that Yitzchak is conceived, born, had a Bris and was weaned, on our holy Shabbos, in a conservative house of worship, two men were celebrating their new male twins in a ceremony the antithesis of Avraham Avinu’s Bris. And in the same parsha is Sodom and Gomorroh
[hat tip to two comments on endofdays blog of Reb Dov bar Leib]

The Future Of The World And Israel

This shiur was recorded November 2016, and it is so relevant and should enter your heart.

[ME: Unfortunately, the world is mentally, politically and culturally confused, and this includes many, many people who claim to be Jewish. It so reminds me of Sodom and Gomorroh, the Generation of the Flood, and Dor HaFlagah all together. Woe is me, what will be? I just read an article that was unreal, but true: "Two mothers in Dallas, Texas were able to both carry their baby using a new method of In Vetro Fertilization. USA TODAY] AND THIS IS NOT FAKE NEWS


On second thought, the above report may not be fake. It seems there is a lot going on in Pittsburgh than we know about. Check this out: Delta Foundation. Pittsburgh May the center for a lot of “Liberalism” and “Progressivism”. This calls for further investigation. After all, as Reb Dov pointed out, this is where the Pittsburgh Platform was formulated in 1909, and again in the 1937 Columbus Platform. Also check this: article still appears on this website, Synagogue Shooting Occurred During Bris for Gay Couple's Twins, BY Daniel Reynolds, October 28 2018 12:50 PM EDT of Advocate. Why did Hashem call our attention to PITTSBURGH?
___________________


It appears in this photo, that makeshift white Jewish stars, containing red hearts with names of the Pittsburgh victims, are placed on what seem to be ‘crosses’?  Another gross anomaly. 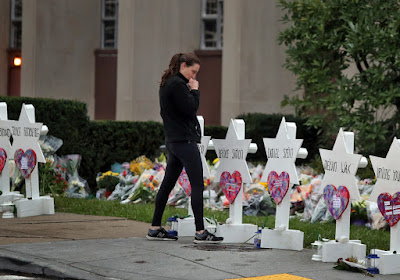