IT TEARS THE HEART. BD”E

”And your brethren, the whole house of Israel, shall mourn the Fire.”
Leviticus 10: in which the High Priest Aaron’s sons were killed by a fire sent from Heaven ...”

“The heart refuses to believe,”  said Justice Minister Ayelet Shaked, “a major disaster befell the State of Israel and in Psagot”

Baruch Dayan HaEmet, the Atar Family taken to Heaven in a fiery crash. We all mourn such a tragic and heartbreaking fiery capture of eight (8) neshomas by HKB”H 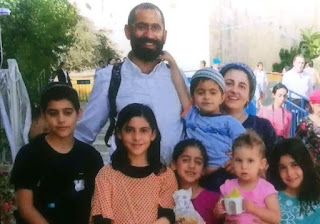 To read the article written about them, hakolhayehudi: Family Attar (Hebrew)


I just received an email containing the following comment:

BS'D
CELLPHONE USAGE CAUSED DEADLY ACCIDENT!
The family from Psagot that was wiped out, all killed in that car accident ...... the driver of the car that hit them admitted that he was involved with his cellphone while driving & crossed into the opposing lane right smack into their car!

While he claims he is so shocked that he will never drive again - that won't bring those 8 nefashot back to life & won't sooth the shattered hearts of their relatives & close friends.


People PLEASE do NOT handle your cellphones while driving!
Posted by Neshama at 7:59 AM

BD'E. No words to say when reading about such a tragedy. Kedoshim! H' yerachem al Amo Yisrael!
Moshiach must be around the corner, please.