UPDATE: Madagascar plague outbreak set to last another SIX MONTHS as health officials warn Black Death pandemic could explode (Sun
WORLD health officials say rainy season poses a big threat to containing the spread of the disease. At least 128 people have been killed and more than 1,300 infected by the deadlier pneumonic strain of the Medieval disease (The UK Sun)

WIKIPEDIA ON THE BLACK PLAGUE:
The Black Death is thought to have originated in the arid plains of Central Asia, where it then travelled along the Silk Road, reaching Crimea by 1343. From there, it was most likely carried by Oriental rat fleas living on the black rats that were regular passengers on merchant ships. Spreading throughout the Mediterranean and Europe, the Black Death is estimated to have killed 30–60% of Europe's total population. In total, the plague may have reduced the world population from an estimated 450 million down to 350–375 million in the 14th century. The world population as a whole did not recover to pre-plague levels until the 17th century. The plague recurred occasionally in Europe until the 19th century. [*see Third Plague Pandemic at end of article]

Warnings of
‘GLOBAL OUTBREAK’ of Black Death
as PLAGUE
continues to spread. HEALTH experts are warning there is “something different” about a new Black Death outbreak spreading across the world.
[article is from the Daily Star, another plague of indecency] 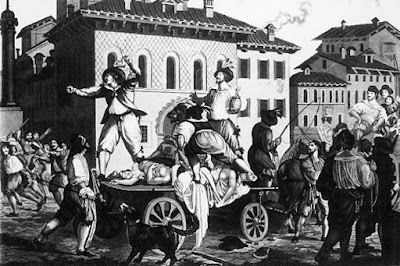 An estimated 50 million lives were lost as a result of the Black Death epidemic of the 1300s.

And now the deadly disease has spread into more African countries after taking root in Madagascar.

So far, the virus has killed 124 people and infected around 1,300, but scientists say this figure will definitely rise.

The World Health Organisation, which has been working with Madagascar’s Ministry of Health, has warned the risk of the epidemic spreading is “high”.

"Plague, though terrifying, is nothing new in Madagascar, where about 600 cases are reported annually," the organisation said on its website.

But officials said while "health officials couldn't explain it", the plague is different this time.

A Crisis Emergency Committee has been established in response to the outbreak, which will "coordinate surveillance, contact tracing, case management, isolation and supplies" until it is contained.

Air Seychelles, one of Madagascar's biggest airlines, stopped flying earlier in the month, in an effort to contain the spread and airports are screening passengers to avoid spread of the plague.

Schools and businesses have been closed, and large public gatherings have been cancelled.

A WHO official said: “The risk of the disease spreading is high at national level… because it is present in several towns and this is just the start of the outbreak.”
The last significant outbreak of the disease occurred nearly a century ago in Los Angeles, when a two-week epidemic killed 30 people.
There are three types of plague – bubonic affecting the lymph nodes, septicaemia which causes bleeding under the skin, and pneumonic which affects respiration.
The WHO describes the pneumonic plague as “the deadliest and most rapid form of plague”
Nearly 1.2 million doses of antibiotics and £11.4 million worth of emergency funding have been sent by the WHO to fight to plague.
People infected with plague usually develop “flu-like” symptoms after an incubation period of three to seven days.
Typical symptoms include fever, chills, head and body-aches and weakness, vomiting and nausea

The third plague pandemic (1855–1859) started in China in the mid-19th century, spreading to all inhabited continents and killing 10 million people in India alone. Twelve plague outbreaks in Australia between 1900 and 1925 resulted in well over 1,000 deaths, chiefly in Sydney. This led to the establishment of a Public Health Department there which undertook some leading-edge research on plague transmission from rat fleas to humans via the bacillus Yersinia pestis.

The first North American plague epidemic was the San Francisco plague of 1900–1904, followed by another outbreak in 1907–1908. From 1944 through 1993, 362 cases of human plague were reported in the United States; approximately 90% occurred in four western states: Arizona, California, Colorado, and New Mexico.

Modern treatment methods include insecticides, the use of antibiotics, and a plague vaccine. The plague bacterium could develop drug resistance and again become a major health threat. One case of a drug-resistant form of the bacterium was found in Madagascar in 1995. A further outbreak in Madagascar was reported in November 2014.
Posted by Neshama at 10:02 AM