It seems the prediction of QUAKE WATCH by about a 7 or higher earthquake that would strike somewhere between the dates November 11 and 15 has actually occurred.


UPDATE: Death toll in Iranian earthquake rises to 328. ArutzSheva reports: The U.S. Geological Survey said the magnitude 7.3 earthquake was centered 30 kilometers (19 miles) southwest of Halabja, near the northeastern border with Iran. The quake struck the mountainous area of Sulaimaniyah province at 9:18 p.m. Local time (1818 GMT) at a depth of 25 kilometers (15 miles), according to the report. WILL IRAN TAKE THIS AS A WARNING?

7.2 magnitude struck an area on the Iraq-Iran border after eight at night Baghdad time. The ripple affects of it were felt all the way to central Israel. Photos from the town of Darbandikhan show houses destroyed and dozens of injured pulled from rubble.

In Erbil, the capital of the Kurdistan Regional Government of northern Iraq many people reported buildings shaking and lights falling from fixtures. Video showed stores trashed as good fell from shelves. “It was like being in a boat in a storm,” one man wrote from the 15th floor of a building. People poured into the streets throughout the city. More than fifty people have been taken to hospital in Erbil with light injuries according to initial reports 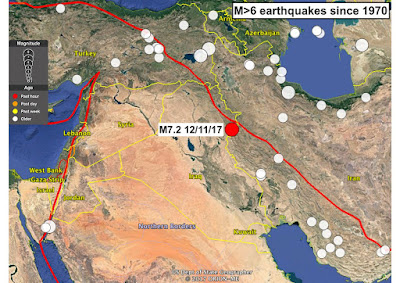