The Real Palace on The Mountain and Yom Kippur

No, this is not a Model of the Temple
Even though it is high up on top of a mountain, surrounded by a wall and what appears as a earth-filled moat between the outer wall and the foundation walls supporting a platform (with no trees) upon which rests a magnificent ersatz palace, with a central edifice jutting up into the atmosphere. 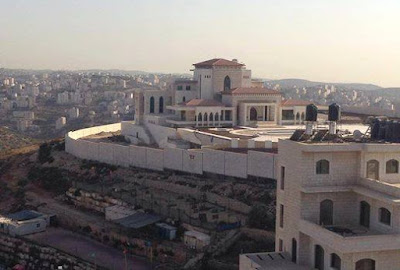 This is the new palace of Abu Mazen, otherwise known as Abbas, the palestinian international negotiator, troublemaker, inciter of rock-throwers and fiery molotov projectiles, and inciter to murder Jews. A recent survey conducted in the West Bank and Gaza shows that 51% of Palestinians opposed the two-state solution, while an additional 65% want Abbas to resign. YNet

This is The Real Palace on The Mountain, Mt Moriah

This is a walk-through the main sanctuary of the Holy Temple, showcasing decades of research and tens of innovative Halachic solutions to various perplexing issues that were resolved to create fully functional, ready-to-use plans. As the visual tour sweeps through the sanctuary, one can see the menorah, incense altar and showbread table, all of which have already been prepared by the Institute, among 70 other sacred vessels. The presentation was specially released to coincide with the Ninth of Av, the Jewish national day of mourning which commemorates the destruction of the First and Second Temples.

This is not a ‘virtual’ representation, but a portion of a complete and highly detailed architectural plan which has been prepared for the immediate construction of the Holy Temple. The plan includes all of components that will be used in building: marble, stone, concrete, wood, flooring materials, overlay of gold, etc.

The external view presents the openings, windows, chambers, the outer hall, the Sanctuary and the Holy of Holies.

In the first stage we are moving through the hall’s entrance. As we continue we arrive at the golden chains described in Tractate Middot, which the young priests-in-training would climb in order to view the decorative crowns that were placed in unique windows above the entrance to the Sanctuary. The visit continues on to the 38 chambers that surrounded the Sanctuary. The door opens and we find ourselves within the first chamber. We turn left and enter into the Sanctuary. From the right we see the three major vessels of the Sanctuary: The golden altar, the table of the showbread, and the menorah. We also see the curtain with its depiction of the two cherubim.

This curtain is actually a double curtain, that separates between the Holy area (the Sanctuary), and the Holy of Holies. We look up to the ceiling of the Sanctuary, which reaches a height of 40 amot. Near the ceiling are the ‘narrowing windows’ (Kings I 6:4) which direct from the Temple outwards.

Turning behind us, we see the doors of the Sanctuary towards the east, as they are opened each morning by the priests, revealing the blue skies of Jerusalem at sunrise.

From the Sanctuary, we turn back to the chambers and go out to the long passageway known as the ‘mesiba.’ We ascend stairs that lead to the roof of the chambers. We continue moving, encircling the Temple from the north and west, afterwards turning east.

At the end of the passageway stands a special ladder that is used to ascend to the upper level. This level has a very high level of sanctity. One opinion maintains that it is only entered once in seventy years (for maintenance purposes).

In summary, this is a highly-detailed building plan which includes room for further innovation by professionals and craftsmen, including decoration, heating and electric etc. According to the decisions of the steering committee that will be established to oversee the construction of the Third Holy Temple, which can be begun immediately.


"Many details about the Temple have been discovered and many more will be discovered. They will discover the foundations of the Temple and many more things, and no one will be able to deny that there was a Jewish Temple. The eye does not believe until it sees. G-d is showing the people of Israel miracles every day. (...) Dear Jews, there are seven locks that must be opened in order for G-d to crown the Messiah as King; six have been opened and the seventh is on its way!" R' Nir Ben Artzi


Yom Kippur, the Special Time
We Are The Closest to HaShem
"Yom Kippur is a day in which we are invited to walk the path toward Hashem that was ploughed by Moshe Rabbeinu’s excruciating labor of the heart. But it is only when we awaken to the full grandeur of this day and purify ourselves to befit our proximity to Hashem that Yom Kippur’s life giving gift of atonement is firmly within our grasp." V'Ani Tefillah Foundation, 5770

We are given this Special Time to cling to HaShem in gratitude and appreciation for all He does for us. We Crowned Him on Rosh Hashanah as King, but now we enter the most intimate time to be with Our King, Our Master, on Yom Kippur. The Temple is the place, but Yom Kippur is the Time. Let us seize the moments.
Posted by Neshama at 9:49 PM