I cannot help but see a link to the Devastation
committed against the Jewish People in WWII
The Wall Street Journal: At Core of Ruin, a Search for Life
Residents Pick Over Destroyed Landscape, Seeking Word About Mothers, Brothers 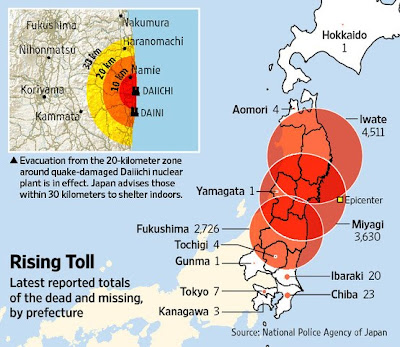 "Local residents walk through the rubble, wide-eyed. Sifting through two-story high mounds of metal siding, logs and snapped power lines, they scrutinize their postapocalyptic landscape for sign of hope."

"They're probably gone," 65-year-old Yumiko Yamauchi said of her two older sisters. Her back is slightly hunched, her legs wobbly."
Reuters: Wind to Blow toward Pacific from Quake-hit Japan Plant
Tokyo – The wind near a quake-damaged nuclear complex in northeast Japan, which has released radiation into the atmosphere, will blow from the northwest and out into the Pacific Ocean on Wednesday, a weather official said. The wind speed will get stronger in the afternoon, blowing as fast as at 12 meters (39.4 ft) per second, said the official at the Japan Meteorological Agency in Fukushima prefecture where the plant is based.

What is the link between Japan and the U.S.?
Perhaps?
Supporting Amalek
Retribution is Built Into the Very Fabric of Creation 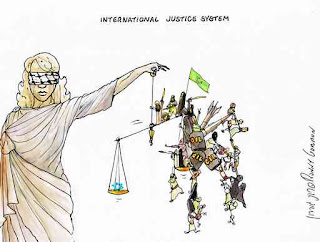 International Apathy. Once again, the Nations of the World are ganging up on the tiny country of Israel, to force upon her their vision of who she should be.
Only ONE Voice of Public Conscience spoke out about the horrific murder of Jewish innocents in Itamar. The nations of the world are once again steathily allowing an evil terror-driven nation to descend upon the Jews of Israel. After the Nazis left the scene, come their inheritors, the "holders of daggers".
"The three big* contributors to the genocidal driven enemies of Israel are:
Thank you *LemonLime Moon
G-d's Gift to the World
Israel is an inheritance given to the Jewish People by the G-d of the Universe, a Holy Land for a Holy People. No nation of the world has such an inheritance. All the so-called great nations of antiquity are no longer, melted into history. Only HaShem's children, the Nation of Jews is still in existence. But the nations of the world are guilt-ridden because Israel's struggles is a testimonial to G-d Who created them.
Retribution is built into the very fabric of the Creation of the Universe, at first seen through "nature" but eventually HaShem will reveal to all His Majesty in unmistakable and undeniable reality.