Sunday was covered in a cloud of sadness
Inhuman, barbaric, cannibalistic, are words that come to mind about the murders in Itamar, of the Fogel family resting after the Shabbat meal, parents, children and baby Hadas a"h. This horrific evil reminds me of the murders in Mumbai, leaving the same inhuman and barbaric footprints of insane murder. This is all the work of Amalek.
There was no shaking this from me. Thoughts of the recent tragedies accompanied me throughout the hours. My only solice, if that, was to look forward to sleep in the evening. Inside our sleeping we transmit and receive thought currents, and a rearranging of that day's events. What can we learn from these tragedies? What can we as a people living in one corner of the world take from these tragedies and apply to our own lives? What do we do now? Go on living as nothing happened?

Impossible.
But how long will this feeling last, unless we put into action some responses. What results came from the destruction of Gush Katif? From Haiti? From World War II?
From Itamar comes, "They kill, we build," as PM Netanyahu said? Have we as a Nation come to the "red line" of "enough is enough, we shout to the world."
But also, dear yidden, we need to look inwardly to our own deeds and to feel remorse, and try to look kindly upon each other. Have patience, do not judge one another, share the values we were given through our Holy Torah with one another in a non-threatening way. It hurts to see innocent peoples suffer, even if this is decreed. We are on an island in this world and need to care for one another, to keep HaShem's Mitzvos that He commanded us to keep. The imbalance in our own lives is contributing to the imbalance in the world. Please yidden, take hold of yourselves and straighten the crooked.

Before the people of the world (thousands of years ago) became agnostics and believers in other paths of worshipping over thousands of years ago, they actually believed in the Creator of the World. The whole world witnessed the events at Har Sinai. We Jews call the Creator HaShem, "the name." Nature is a creation also, a veil between HaShem and His creations, the inhabitants of the world.
When nature veers from its natural pathways, it signals that something is wrong on planet earth. What can we possibly learn from a servant of HaShem rebelling? Something in the natural working order of the world is askew. An earthquake or a dagger, what is the difference of its effect? Destruction and death lie in its path.

One difference.
The dagger is premeditated!
It is held by a (supposedly) human being.
For 60 years, the Jewish People have tried to get along with the "holders of daggers." They come from the "planet death." They do not understand the preciousness and sanctity of life. There has been NO change in the attitude, behavior or purpose of the "holders of daggers." In fact, they teach their little children to wear bombs and wield daggers, to grow up to kill little Jewish babies. There has been NO change in the language, mentality, intelligence and purpose of the "holders of daggers" since they once roamed the desert in gangs of uncivilized warring gangs.
Because of the false pride and hatred of the desert tribes
they have not advanced into a civilized nation
able to provide for its people,
who are still living in deprivation,
physical and mental poverty.
Japan was once a war-like nation. After their horrific defeat in 1941, they turned their intelligence and might creatively developing into "the third largest national economy in the world, after the United States and China". Technologically and scientifically advanced, they developed their tiny island into a beautiful modern country. But look what the 'natural' force of an earthquake and tsunami did to this tiny compact island.
275 new tremors ... Quake riddled Japan
Nuclear explosions
Meltdown of a Nation
The islands of Japan are located in a volcanic zone on the Pacific Ring of Fire. 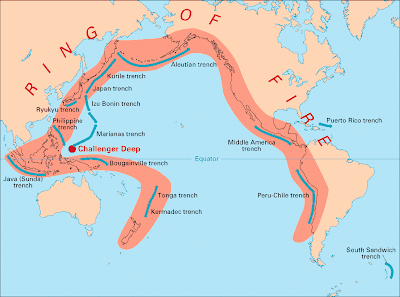 From Wikipedia: Japan has a total of 6,852 islands extending along the Pacific coast of Asia. Together they are often known as the Japanese Archipelago. About 70 to 80 percent of Japan is forested, mountainous, and unsuitable for agricultural, industrial, or residential use. As a result, the habitable zones, mainly located in coastal areas, have extremely high population densities. Japan is one of the most densely populated countries in the world. As of 2010, Japan is the third largest national economy in the world, after the United States and China, in terms of both nominal GDP and purchasing power parity. Japan is a leading nation in scientific research, particularly technology, machinery and biomedical research. Nearly 700,000 researchers share a US$130 billion research and development budget, the third largest in the world. Japan is a world leader in fundamental scientific research, having produced fifteen Nobel laureates in either physics, chemistry or medicine, three Fields medalists, and one Gauss Prize laureate.
But what has this technological advance accomplished for these poor people? What actions did their government take to precipate this nuclear mess? For decisions has a nation been held accountable . . . for decisions will the world be held accountable.
We cannot prevent earthquakes.
But we are obligated to address the "holders of daggers".
There is accountability in the world
The Jewish Nation needs to shine the Light of the Holy Torah onto the peoples and nations of the world. There are 7 laws that the G-d of the Universe gave to His creations, the people of the world. And these seven laws bring about harmony on the earth. These basic seven laws are the beginning of civilization and a civilized people.
I suggest that PM Netanyahu start telling the nations of the world that they will be held accountable for their hatred and actions against the People of Yisrael, the Jewish People. That they need to keep the Seven Laws given to Noah after the Great Flood if they want to be spared the retribution coming upon the world's nations. There must be an end to killing and thievery, an end to hatred and war. The time has come to be accountable for one's actions.
These laws are known as the "7 Laws of Noah":
The Seven Laws of Noah (Hebrew: שבע מצוות בני נח‎ Sheva mitzvot B'nei Noach) form the major part of the Noachide Laws, or Noahide Code. This code is a set of moral imperatives ... given by G-d as a binding set of laws for the "children of Noah" - that is, all of humankind.
The holy seven laws are:

Prohibition of Idolatry
Prohibition of Murder
Prohibition of Theft
Prohibition of Sexual immorality
Prohibition of Blasphemy
Prohibition of eating flesh taken from an animal while it is still alive
Establishment of law courts
According to Judaism, any non-Jew who lives according to these laws is regarded as a Righteous Gentile, and is assured of a place in the world to come (Olam Haba), the final reward of the righteous.
If one transgresses these Noahide Code, one will be held accountable.
As told in the Passover Haggadah, the Children of HaShem witnessed at Yam Suf the destruction of their enemies, who had kept them in slavery, tortured them, and killed their children. This very same situation is happening in our times, Jews incarcerated for being Jewish, kept in prison beyond a rational timeframe, and the killing of innocent Jewish children.
I needed to do something with this cloud of sadness and the grief inside me for all the suffering that the Jewish People have gone through, propelled by the recent tragedies. With each horrific act of those "holders of daggers" the disgust and repellence grows and grows. I await another Yam Suf.
The nations of the world and the enemies of the Jewish People will be held accountable. Just as the Jewish slaves were redeemed from Egypt by Moshe Rabbeinu, we await the final redemption.
Moshe Rabbeinu,
we the Jewish People,
HaShem's children await your return
Posted by Neshama at 8:37 AM