Our Sympathies go out to the Japanese People 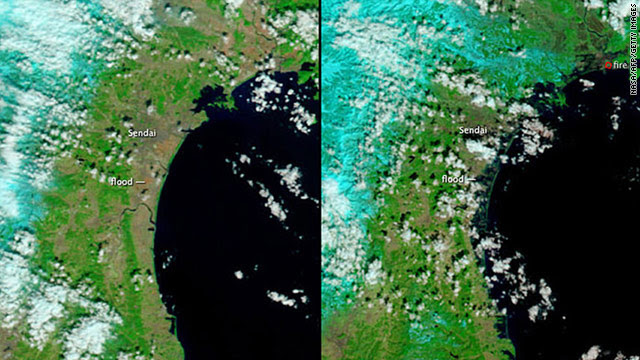 We must learn humility in the face of such tremendous unrestrained earthly power. The earth revolted and the waters fled. A lesson of powerlessness in the face of Superior strength for all nations of the world, especially the arrogant ones.

Images released by NASA show Japan's northeast coast before, left, and after flooding from the quake-induced tsunami. Photo from CNN link with article.


(CNN) -- The powerful earthquake that unleashed a devastating tsunami Friday appears to have moved the main island of Japan by 8 feet (2.4 meters) and shifted the Earth on its axis.

"At this point, we know that one GPS station moved (8 feet), and we have seen a map from GSI (Geospatial Information Authority) in Japan showing the pattern of shift over a large area is consistent with about that much shift of the land mass," said Kenneth Hudnut, a geophysicist with the U.S. Geological Survey (USGS).

Reports from the National Institute of Geophysics and Volcanology in Italy estimated the 8.9-magnitude quake shifted the planet on its axis by nearly 4 inches (10 centimeters).
Full article here
Posted by Neshama at 8:27 AM