Have you ever heard of the Ashalim Solar Power Plant?

Well, that makes two of us!

Until a few weeks ago.

We were driving in the Negev. Suddenly, across the expanse of sandy hills, I saw an intense light which seemed to hover over the desert. I estimated it was about twenty miles away, and it was glowing like the sun. We drove north on Route 40, and then west on Route 211. We rounded a hill and there it was!

But what was it?

It was a huge tower in the middle of the desert (820 feet tall, to be exact. For reference, the Empire State Building is 1454 feet.). But that’s just the beginning: on the desert floor are a half-million computer-controlled mirrors which reflect the sun’s rays toward the top of the tower. The heat from this concentrated light boils water, which turns turbines and creates a huge amount of electricity.

Okay, you know that I do not get excited about technology, so what got my insides jumping when I saw that light?

My friends, we have just completed Zman Chairusainu. We are marching to Har Sinai. Soon, b’ezras Hashem, we are going to see a great light which will be visible around the world. “Hashem came from Sinai, having shone forth to them from Seir, having appeared from Har Paran, and then approached with some of the holy myriads. From His right hand He presented the fiery Torah to them.” (Dvarim 33:2)

I saw a great light shining across the desert. I felt as if I were seeing a physical manifestation of what Am Yisroelcan do if we focus the light of Torah upon our hearts. We can light up the entire world.

How could it be that the Shechina never left Har Habayis, yet we daven every day that Hashem should “restore His Shechina to Tzion?”

The Shechina is there, my friends, but the world does not perceive it. “Rebbe Acha said: The Shechina will never depart from the Western Wall, as it is written, (Shir Hashirim 2:9) ‘Behold ― He stands behind our wall’" (Midrash Rabba, Shemos 2:2).

While we are in Golus, the Shechina is shrouded; but we are about to emerge from darkness. Soon the Shechinawill be tangible throughout world just as that tower of light is visible across the Negev. Then the nations will tremble before Hashem and His Nation, the Children of Israel. No one will dare touch us! The fear of G-d will be upon them!

“And the earth quaked and roared, the foundations of the heaven shook; they trembled when His wrath flared. Smoke rose up in His nostrils, a devouring fire from His mouth; flaming coals burst forth from Him… Hashem thundered in the heavens, the Most High cried out. He sent forth His arrows and scattered them … lightning, and He frenzied them…. For You, Hashem … will illuminate my darkness…. He is a tower of salvations to His king, and does kindness to His anointed one, to Dovid and to his descendants forever….” (Haftara Seventh Day Pesach)

“Ohr chadash … May You shine a new light on Tzion and may we all speedily merit to [to see] it. Blessed are You, Hashem, Who fashions the luminaries.” (Shacharis) 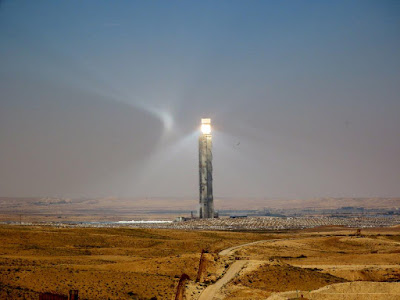