The Vision of Ezekiel – The Merkabah – NASA

Chassidis:  "The Kabbalistic account explains this difference in terms of the Four Worlds. All prophecy emanates from the divine chokhmah (wisdom) realm of Atziluth. However, in order to be perceived it descends to be enclothed in vessels of lower Worlds. Isaiah's prophecy saw the Merkabah in the World of Beriah divine understanding, restraining his explanation by realising the inadequacy of description. Ezekiel saw the Merkabah in the lower World of Yetzirah divine emotions, causing him to describe the vision in rapturous detail."

"And I saw, and behold, a tempest was coming from the north, a huge cloud and a flaming fire with a brightness around it;

[…] and from its midst, it was like the color of the chashmal from the midst of the fire; And from its midst was the likeness of four living beings, and this is their appearance; they had the likeness of a man; And [each] one had four faces, and [each] one had four wings; And their legs were straight legs, and the soles of their feet were like a round foot, and they sparkled like the color of burnished copper;

What Does the Torah Say?


To venture into this topic and not as definitive totality:  there is an e-Book, “Extraterrestrials; UFOs in Light of Torah” which you can download and find out what Rabbi Ariel Bar Tzadok says the Torah says:

Not afraid of what "might be" in the dark? This book documents according to Torah sources how we are not only not alone in our universe, we are not even alone on our own planet. If you have any interest in this topic, you must read this book. The references are all documented and cannot be disputed. Whether or not you will wish to believe what you own eyes read, that is another story... PDF online E-book auto download. An in-depth Orthodox review of the modern UFO phenomena in light of the teachings of the Rabbis and Kabbalists. This work reviews the Torah beliefs of life in outer space. It also addresses from a kosher Torah viewpoint the allegations of close encounters, aliens abductions, crop circles, and government conspiracies. This book contains involved teachings about angels, demons, alternate dimensions, meditative practice, and many other peripheral issues that are sure to be a real eye opener.

The description reads, "Space is attracting increasing attention today. During last few years some commercial space companies have been opened, such as SpaceX and Virgin Galactic; there were plans for manned missions to Mars, such as Mars One and Inspiration Mars Foundation; more and more countries start their space programs. All that leads to cheaper space flight and to the popularization of science and cosmos in general.

This site is a little image search service on the narrow subject - space and everything connected with it. We collect thousands of pictures and show them to you directly from their sources aggregated by their tags and topics.”

On this site you will find (with links):


NASA designed a ship that will travel faster than light: 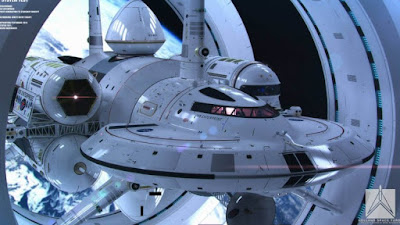 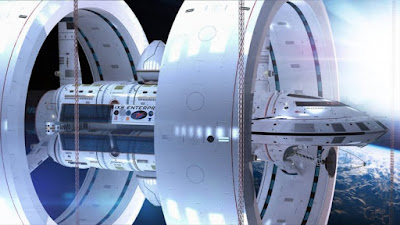 And this video shows a depiction of a flying wheel


The IXS Enterprise was a starship concept created in 2013 for an interstellar mission in the late-21st century. It was based on the research into the generation of a microscopic warp bubble by a team of scientists led by Doctor Harold White at the Johnson Space Center in Texas.

Source of these pictures and video (above and below)


A UFO that fits the description of "a wheel within a wheel" made by the prophet Ezekiel, was snapped by the crew of Apollo 8, in December 1968 during Moon flyby.

Sorry, cannot believe this. We have to remember that this is all the work of the soton, Esav's angel and its power. This is what and where all this stems from.

There are cele3stial beings besides angels; there are demons, etc., but life as we understand it from other planets, galaxies, whatever is nonsense.

We are also told that the tzadikim will be rewarded with even 18,000 worlds, but this is not things that we can understand as yet. All will be revealed when Moshiach will teach us the mysteries of life and the world.

Anonymous, perhaps, then, the book that is suggested here may possibly be something for you to investigate?

abhishek mane, thank you for commenting. How do you know this? Are you a scientist? I would like it if you could give more supporting links for me to view?