In Honor of Yom Yerushalayim: Archaelogical Timeline of Eternity

In Honor of Yom Yerushalayim, from ArutzSheva: 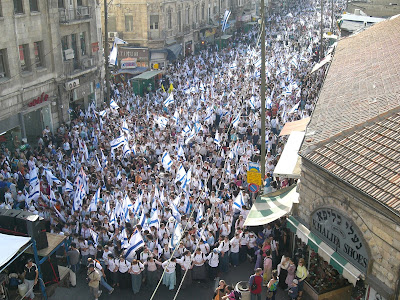 An Archeological Timeline of Eternity
by David Wilder, Eretz.Org

Archeologists Immanuel Eisenberg and David Ben-Shlomo had just about wrapped up the excavations. Their finds were admirable.

On the western-most area excavated, he discovered two walls, one dated back to the days of Noah and the flood. Adjacent to this 4,500 year old find were stone stairs, in perfect condition, from the same era, most probably, leading to the 'gate of the city.' Next to the stairs is another wall, this one being 3,700 years old, that being the middle bronze era, that being the time of Abraham and Sarah.

On the eastern most side of the excavation
are Byzantine wine cisterns.

Just to the east of them is a 'four-room' house, 2,700 years old, that being the First-Temple era, built during the days of King Hezekiah. During this age, the kingdom utilized Hebron as a place to store food for the army, then fighting a war with Assyrian King Sinharib. The grains were kept in clay jars. Near the bottom of the jar's handle was a small seal, identifying the jar and its contents as property of the Kingdom.

The seal itself looked something like a cross between a bird and a beetle, some with two wings, and others with four. Above the seal was inscribed the word, L'Melech, 'belonging to the King.' Beneath the seal was another word, identifying the area where the food jar was being stored.

During these excavations, Eisenberg and his team discovered five of these such seals, all marked with the words 'L'Melech, and underneath, in ancient Hebrew, the word 'Hebron.' Eisenberg, speaking to then defense minister Moshe Arens, at the site, exclaimed, "if anyone had any doubts as to whether this is the original, Biblical Hebron, those doubts have all been erased. We have proof that Jews have lived here since the days of Abraham."

Eisenberg and Ben Shlomo's excavations southern side of the Tel were no less impressive. They uncovered a 2,000 year old industrial area, complete with ponds and aqueducts for water flow. A house, or more likely, pottery factory, burned down during the wars with the Romans, containing remnants of jars was found. Inside the house, two amazing discoveries: a large iron key to the building's door, and also a jar containing olive pits, 2,000 years old. Additionally they found both olive oil and wine presses.

Parts of the south-eastern region of the Tel had been previously excavated by Philip Hammond, from the United States, in the middle 1960s. Hammond uncovered parts of a 3,700 year old wall, whose stones were so large he described them as Cycloptic.

Eisenberg and Ben-Shlomo continued to dig out this wall, revealing a large section of it. However, a most astounding revelation was determined, that being that the wall had served Hebron for over a thousand years. That is from the time of Abraham, probably until the destruction at the hands of Sinharib, 2,700 years ago.

In other words, when Abraham entered Hebron from the south, this he saw this wall. When Calev ben Yefuheh came into Hebron, being a member of the spies Moses sent to Israel from the desert, this is the wall he viewed. And when David began the Kingdom of Israel in Hebron, some 3,000 years ago, this wall surrounded the original 'City of David.' 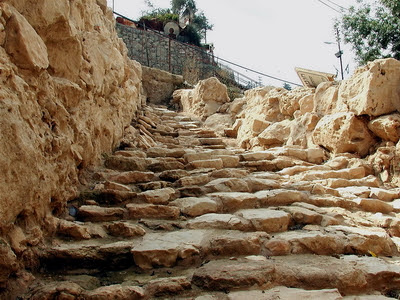 The dig was just about completed. A bulldozer started pushing out dirt that had been piled up during the dig. As it finished its work, the archaeologists requested that it continue digging down, where the dirt had covered the earth. Just to make sure…

To their surprise and amazement, the bulldozer uncovered a large pit. Continued work led to another remarkable discovery. Two very large Mikvahs, that is ritual pools, in beautiful condition were found at that site. They were dated to the Second Temple period, that is, some 2,000 years old. They were astounded.

There was no doubt as to the authenticity of these artifacts or the time of their origin. And here again, solid proof of, not only a Jewish presence, but of a solid presence. Only such a population could allow for this type of industrial area and such large mikvahs.

And of course, the foremost site in Hebron is the huge monumental structure built by Herod atop the caves of Machpela, again, 2,000 years ago.

The Jewish population in Hebron, as most of the Jewish inhabitants of Judea, where expelled by the Romans following the destruction of the 2nd Temple and the defeat of the Jewish revolts. However, there are recorded accounts of Jews praying at Ma'arat HaMachpela in the middle of the 6th century. And in 614 it is written by the Muslim historian Ibn Huldan 'that the Jews in Hebron assisted the Persians to conquer the city, thereby ending the persecution at the hands of the Byzantines.' When exactly the Jews returned to Hebron is not entirely clear, but from this account it is clear that they had come back.

It seems that there were no Jews in Hebron was between 1100 until the middle 1200s. In 1100, following the Crusader conquest, Jews were expelled from the city. After the Mamluk conquest in 1260, Jews again returned to Hebron.

The Avraham Avinu Synagogue was built in 1540 by Jews who had been expelled from Spain in 1492. And so the community continued until the 1929 riots and expulsion. For the first time in almost 1000 years, Hebron was emptied of its age-old Jewish community.

MUST SEE Secrets under the Al Aqsa Mosque A Photographic Display to be seen on ArutzSheva in Honor of Yom Yerushalayim.

INCLUDES "A photographic essay made possible by a 1927 earthquake and a British photographer who explored the area revealed under the mosque." Amazing Photos of the Temple Mount, entrance to underground – Subterranean passage leading north from the Double Gate toward the center of the Temple Mount. (Library of Congress photo)

Two pictures taken by Hamilton of columns and subterranean passageways leading from the Double Gate toward the center of the Temple Mount.
(Israel Archaeological Authority) [9]

Many of these sites and structures may have been destroyed in recent years by the Waqf’s (Muslim Council) bulldozers during their construction of subterranean mosques under the Temple Mount. Fortunately, photographs still exist and were digitized by archivists so we can document what were probably parts of the Jewish Temple complex and what the Mufti denies.
Posted by Neshama at 9:48 AM