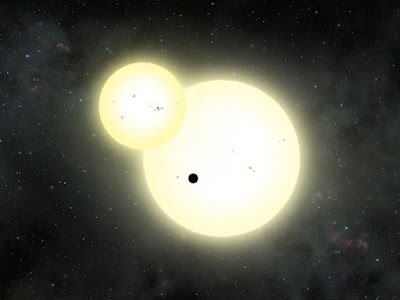 An artist's impression of the simultaneous stellar eclipse and planetary transit events on Kepler-1647 b. Such a double eclipse event is known as a syzygy. (Lynette Cook)


"Some worlds have more than one sun in their sky. Now scientists say they've confirmed the existence of the largest-ever planet orbiting a pair of binary stars – a gas giant with the same mass and radius as Jupiter. Exoplanets like this one – situated in their stars' habitable zone and massive enough to lasso in many rocky moons – could be an interesting place to go looking for signs of alien life.

"The newly confirmed behemoth has been dubbed Kepler-1647 b, and it sits 3,700 light-years away in the constellation Cygnus. At an estimated 4.4 billion years old, it's roughly the same age as Earth. But it's nothing like our home planet. It's what is known as a circumbinary world – one that orbits two suns that dance together as a binary pair – and it's the size of Jupiter, a planet with a diameter more than 11 times that of Earth's. Its suns are pretty similar to our own (one is slightly smaller and the other slightly larger) but, well, there are two of them.

"The first transit was detected way back in 2011, but with one transit it's hard or impossible to tell what's going on,” […] "So we had to wait for three years for the planet to transit again, during which time we kept a close eye in the system, analyzing the available data and gathering new observations.”

"Habitability aside, Kepler-1647 b is important because it is the tip of the iceberg of a theoretically predicted population of large, long-period circumbinary planets," study co-author William Welsh of San Diego State University said in a statement:

"New planet is largest discovered that orbits 2 suns –  Kepler-1647 b is the largest planet, both in size and orbit, of any circumbinary planet discovered so far (SAN DIEGO STATE UNIVERSITY) EUREKALERT

SAN DIEGO (June 13, 2016) – If you cast your eyes toward the constellation Cygnus, you'll be looking in the direction of the largest planet yet discovered around a double-star system. It's too faint to see with the naked eye, but a team led by astronomers from NASA's Goddard Space Flight Center and San Diego State University used the Kepler Space Telescope to identify the new planet, Kepler-1647 b. The discovery was announced today in San Diego, at a meeting of the American Astronomical Society. [… ]

Beit - The, EIR - city, not just any city but the capitol city

Albireo double star in Cygnus, the swan... as in... under His wings you take refuge

And Albireo, one star is a blue sapphire and the other is gold, the colors of a (Shabbat) candle flame!

Thank you Mordechai for commenting.

This corroborates (or elucidates) the sightings enumerated in various videos in my other posts. All have links to sources.

Yes, it is a planet 3700 light years away. That is it would take a spacecraft moving at 10% of the speed of light 37,000 years to get there. If the planet were traveling toward earth at ten percent of the speed of light according to the reference frame of the planet, about 50,000 of our years would pass before this planet showed up in our solar system. I don't think that this planet is Nibiru. It is not in our solar system, not even close. If Nibiru does show up, it will take a supernatural relocation of a dwarf star which at this moment in time does not exist in our solar system. If there is such a potential dwarf star it is so far away that derekh hateva, it would take at least 50,000 years to show up. If G-d wants to instantly bring such a dwarf star into our solar system, He will do that at a time of His choosing. Yet it has not yet happened. Since it is in G-d's hands, it could happen anytime. I would agree with that, but it has not yet happened that Nibiru exists at this moment in our solar system. G-d bless, Dov

Reb Dov, thank you for commenting.