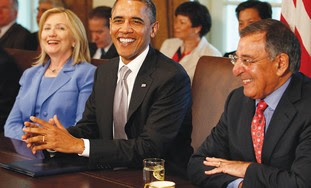 Caroline Glick wrote a teriffic article on the about-face of America toward Israel, An Ally No More. I guess we all have seen this coming.

"The only state in the region where women are given full rights and legal protections became the focus of Clinton’s righteous feminist wrath."

Because some Orthodox soldiers (who are not permitted to listen to women singing) exited when female soldiers began a vocal presentation (as part of the entertainment), Clinton deems this as "women in Israel being under attack" PLUS at the same time the "IDF is guilty of being against democracy by not letting the soldiers leave the hall."

You're damned if you do and damned if you don't!
"But Clinton didn’t end her diatribe with the IDF’s supposed war against women. She continued her onslaught by proclaiming that Israel is taking a knife to democracy by permitting its legislators to legislate laws that she doesn’t like," says Caroline.
See American Foot in Mouth to read about Clinton's 'fear' and 'shock' that sparked Israeli anger, to the point that MK Ariel said that Clinton "should mind her own business ... “Her unwanted interference is an additional proof that Israel needs laws that will preserve its character and protect it from interference by foreign governments who try to minimize Israel's Jewish character,” Ariel added."

Mr Panetta, all elated after receiving an award for eliminating BinLaden, who was a terrorist threat to America and the world, decides now to take the side of the 'other' terrorists and condemn Israel.

It looks like the three "say no evil, see no evil, and hear no evil" may be smiling right now, but those that persecute the Jews will feel the full wrath of HaShem's vengeance, as foretold by the Prophet Zecharia.

Zecharia 3:
And it shall come to pass in that day, that I will make Jerusalem a stone of burden for all the peoples; all that burden themselves with it shall be sore wounded; and all the nations of the earth shall be gathered together against it.

Zecharia 9:
And it shall come to pass in that day, that I will seek to destroy all the nations that come against Jerusalem.

They may be smiling now,
but if they continue to persecute Yisrael ...
according to the Prophet Zecharia,
they will be punished by G-d
for their severity against Yaakov's children, Yisrael
Posted by Neshama at 3:50 PM