Inhofe Blasts Obama at Grove Town Hall
Right-thinking Americans can only hope the country will survive the next 16 months of the Obama administration until Republicans can regain control of Congress, U.S. Sen. Jim Inhofe said Wednesday.

“I never dreamed I would see an administration try to disavow all the things that have made this country different from all others,” Inhofe told more than 300 people at a town hall meeting in the Grove Community Center. “I have never seen so many things happening at one time so disheartening to America.” Inhofe found a highly receptive audience.

“Every institution that has made this country the greatest nation in the world is under attack,” ... Inhofe said President Barack Obama is disarming the military, is destroying everything good about America and is determined to turn foreign terrorists loose on U.S. soil.
He is also alarmed, he said, by the proposed closing of the detention camp at Guantanamo Bay, Cuba. The Obama administration wants to shutter the camp because of its association with torture. “There has never been a case of torture there. The people there are treated better than in the federal prisons.” Inhofe’s third concern, he said, is that “Barack Obama is disarming America.” He conceded that Obama requested more military spending, but he criticized the elimination of several weapons systems, including the F-22 fighter.
“Those of you who think like I do,” Inhofe said, “hope this country can hang on another 16 months.”

Broun warns of dictatorship
U.S. Rep. Paul Broun is again raising the specter of Democrats turning the United States into a totalitarian state … he apparently has not changed his belief that President Obama may be a fascist since he made similar remarks in Augusta in November and then in an Associated Press interview.

As he did when comparing Obama to Hitler and the Soviets last year, Broun cited a speech Obama gave in Colorado during the campaign last July calling for "a civilian national security force that's just as powerful, just as strong, just as well-funded" as the military.

In the speech, Obama called young Americans to serve both at home and abroad, and said he would expand the Peace Corps, AmeriCorps and other volunteer opportunities. Broun, however, said Obama was referring to a national police force. "'The liberals say, 'What is wrong with Americorps?' " Broun said. "Well, this is not Americorps."

"They're developing a shadow government that (does not) answer to the American people," Broun also said he thinks the national media is openly supporting Obama's policies. He also said he believes the president and Attorney General Eric Holder will enact new gun-control policies.
The Fox is a very "cleaver" or "sly" creature,
finding ways to outsmart his prey ... 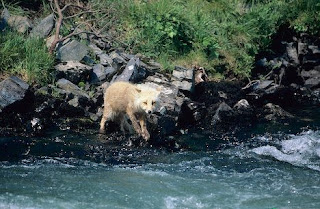 The Rabbis taught that once the Roman government forbade Jews to study the Torah. Pappus ben Judah found Rabbi Akiba publicly gathering people to study Torah and asked Akiba whether he did not fear the government. Akiba replied with a parable: A fox was once walking alongside of a river, and he saw fish swimming from one place to another. The fox asked the fish from what they fled. The fish replied that they fled from the nets cast by men. The fox invited the fish to come up onto the dry land, so that they could live together as the fox’s ancestors had lived with the fish’s ancestors. 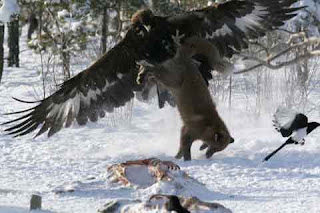 [but the mighty Eagle wins over the fox]

Akiba said that it was the same with Jews. If such was the Jews’ condition when they sat and studied Torah, of which Devarim 30:20 says, “that is your life and the length of your days,” how much worse off would Jews be if they neglected the Torah! (Babylonian Talmud Berakhot 61b.)

We Jews are at home in our Homeland and G-d A-mighty has brought us back to His Land, in order to begin the Geula, the rectification of the world, and has designated His children as the guarantors. The Chutzpa of world leaders when they 'do' more than they are permitted, and interject their 'private' venom, will not go unpunished, as Belshazzar: 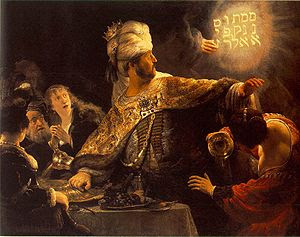 Daniel 5:1-4 describes "Belshazzar's Feast" in which the sacred vessels of Solomon's Temple in Jerusalem, which had been brought to Babylon by Nebuchadnezzar at the time of the Captivity were profaned by the company. The narrative unfolds against the background of the impending arrival of the Persian armies.

In consequence of this, during the festivities, a hand was seen writing on the wall of the chamber a mysterious sentence mene mene tekel upharsin, which defied all attempts at interpretation.

When the Hebrew Daniel was called in, he read and interpreted the words. The last word (prs) he read as peres not parsin. His free choice of interpretation and decoding revealed the menacing subtext: "Thou art weighed in the balance and art found wanting". The divine menace against the dissolute Belshazzar, whose kingdom was to be divided between the Medes and Persians, was swiftly realized: in the last verse we are told that Belshazzar was slain in that same night, and that his power passed to Darius the Mede.