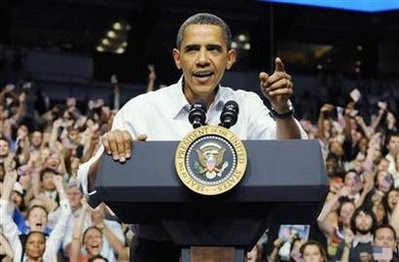 Things
are
heating
up !
The Prez is determined to get his Medical Rationing Plan put into action, for better or worse.
"Republicans are seething,"
one source said.
"Joe Wilson isn't the only Republican who thinks the president lied for forty-five minutes; he's just the one who said it out loud." "The John Batchelor Show" .
"The word from the cautious, defensive Republican leadership meeting on Capitol Hill the day after the president's health-care address was that no one in the GOP had ever seen anything like this.

"He walked in and threatened us, a separate and equal branch of government" said one congressional Republican source. "He had a plan? That was the biggest myth of all. There're just platitudes. Twelve years in the minority, two and a half in the majority, and they still don't have any semblance of a plan. The president declared he was gonna fix health care forever. He tells us the details are left to be worked out. Everybody thought he was kidding. Telling a joke. But he wasn't kidding. He didn't understand it was a joke. The whole chamber laughed at him." "
The full "Batchelor style analysis at The GOP's Next Moves .

But for those living in America, we watch this tug of war between those pushing a socialist/marxist style regime vs. Today's version of the Colonial Founders. 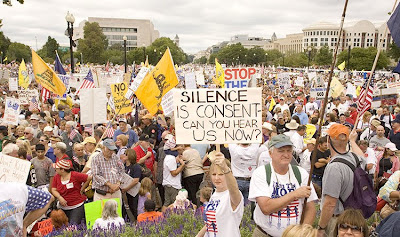 The people want their voices heard.
[great pics courtesy of atlas but seen here]
We are witnessing the "Change" this young black Chicago community organizer promised on the campaign trail vs. the US Constitution, US Bill of Rights, and the traditional Senate and Congressional processes.

"[...] The history of the United States is most peculiar. In one way the nation grew in typical Edomite fashion. It conquered and sought to destroy the indigenous peoples of this land and sought to make itself into a mighty power similar to Europe. Yet, with all the Edomite influence of prejudice and evil against the Native and against the imported Africans, there was something about the United States of America that made it in many ways deeply different from its European counterparts. In spite of all its fallings, there were still significant influences in the nation that did not tow the European line. There was significant support for African/American liberation, to such a point that it was one of the major causes of the first American Civil War.

"America could not escape its Edomite origins, yet still, this representative of Edom was somehow peculiarly different from its European origins. America outshined the Europeans in the realms of morality and religion. America came to represent the best of what Europe had to offer. The creation of the United States of America was essentially Heaven's plan to emerge the "head of Edom."

"The American culture has for decades been despised specifically by the Europeans. Although both cultures share a desire for secularism and both are rather opulent, still the American culture has for the longest time managed to hold on to its Protestant religious ethic and religiosity. To be blunt about it, America has always been more sincerely religious than the Europeans.

"To this day, when traditional religion is definitely being targeted and rooted out of the public eye, still there remains throughout the United States millions of religious faithful from many different religious paths who all share the common values of traditional morals. This American attitude is what makes America reviled in the eyes of many Europeans. And now that a younger generations of Americans are about to take over to lead the country; they plan to redirect the nation in their own course, a course set more in accordance to European standards than in common with traditional American standards. [...]"

And in conclusion, a few words
from Thomas Jefferson 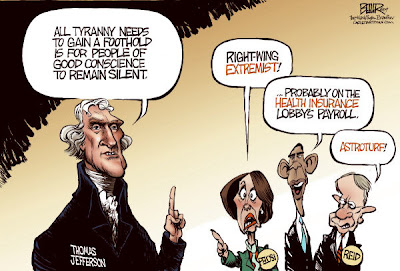 For us of the Jewish Religious Torah Way of Life these changes may be laden with Anti-Torah swamps and quicksand.
Posted by Neshama at 4:04 AM