OK in TOKYO but not in YERUSHALAYIM? 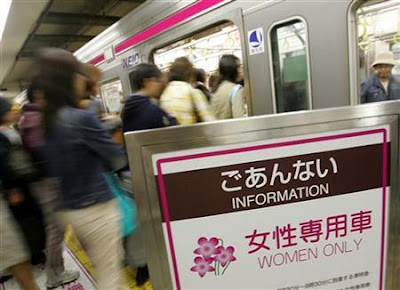 False accusations of groping were highlighted when Japan's Supreme Court overturned in April the conviction of a professor for groping a girl on a Tokyo train. Judges pointed out a need to be careful in such cases when the accuser was the only source of evidence, media said...The reality is that we have few requests from Seibu Railway users for setting up male-only carriages..."

In Tokyo, around 2,000 people were arrested for groping in 2007, data from the police showed. Many crowded train lines, including Seibu lines, designate a carriage just for women during the rush hour. 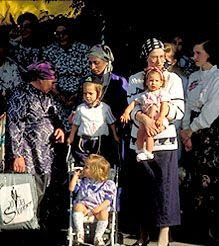 A group of ultra-orthodox women has recently launched a campaign supporting gender separation on public buses, in response to claims that segregation was being forced on haredi women by rabbis.

The lobby's founder... explained that the initiative enjoyed the support of the wives of senior rabbis from all the haredi circles. "The other side makes it sound like we haven't been asked about it… women are the daughters of kings! We have a say as well!"

... "we are not feminists who want to make a fuss, but when people speak on our behalf this is just too much…. I represent tens of thousands of women who ride the bus everyday and want separate lines. To say that haredi women should be felt sorry for is to distort the truth."

"Why is it that in Monsey, US a Jewish woman can ride the bus separately and non-Jews respect her wishes as a customer? Why are women in London allowed to get on the bus through the back door, not out of religious considerations but simply because it's jam packed? Why do women agree to wear a white robe in the Vatican, but make a big deal about it in Israel?

WHY IS IT OK IN TOKYO JAPAN
but
NOT IN YERUSHALAYIM IR HAKODESH?

I hope the reason for wanting separate seating in Israel has nothing to do with groping.