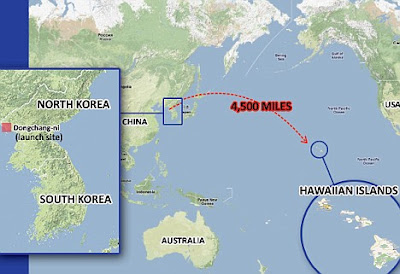 Japan warns that North Korea may fire missile at U.S. on Independence Day
JULY 4TH
FIREWORKS FOR REAL!
North Korea may launch a long-range ballistic missile towards Hawaii on American Independence Day, according to Japanese intelligence officials.
US puts more missile defense around Hawaii: "We do have some concerns if they were to launch a missile to the west in the direction of Hawaii," Gates said. 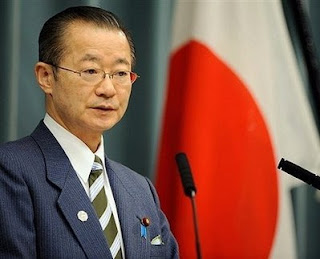 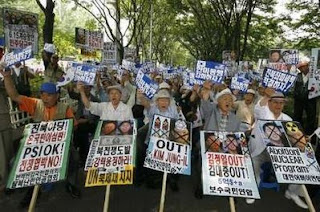 And the Persian people there are fed up with 'AHmannutjob' 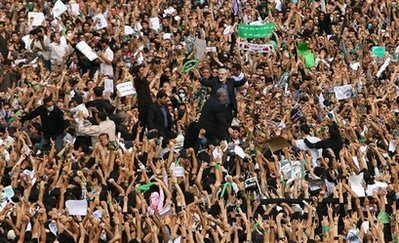 There is alot of unrest in the world, and more liable to erupt at any minute. In old Romania, Moldova's election unrest. And then unrest in Lalgarh in West Bengal, and Uzbekistan closing the border with Kyrgyzstan, and then there is Afghanistan
When you examine the above map, that so-called missile could go to Hawaii, or to Alaska, or when it gets up the speed, straight across the ocean to California.
Is it conceivable that 'Kimmentallyill' is testing his missile aiming capabilities, believing that the world will not go to war with N. Korea over Hawaii (small island) because of a risk that Kim will also attack S. Korea and/or Japan. One mentally ill dictator could create a mess in the Far East and possibly also in the West.
The current threat may just prove to him that while he keeps 'testing' he will be able to achieve his 'real' goal of actually hitting the US. From Korea the missile could be sent straight to the West Coast.
But that might only be half his plans. Kim might devise a plan to get soldiers close enough to land on US shores. But that could only be achieved via a submarine(s) close to the East Coast, capable of also firing enough missiles to take out or weaken Washington DC, and then coming ashore to plant a conquering flag.
But then again, 'Kimmentallyill' might be a smoke screen for China. After all, they could wipe out the US currency, and they could just change the "made in China" labels for "made in the US of China" after they take over all our land and resources.
Something to think about as prophecies swirl around.
Posted by Neshama at 7:08 AM