Steve explains that these Indian Tribes are gathered to save the natural resources in this area of America – as their **PROPHECY – concerning NIBIRU.

Seeing the front line today in North Dakota - it became very clear to me that the elites will use any force to stop the cause of peace. On the one side, a peaceful camp where I heard elders rebuke the young for lack of prayer, contrasted with the authorities with guns, tanks, helicopters - yep, we are fighting for the very soul of our world.

16 Arrested at North Dakota Pipeline Protest. Native Americans from scores of tribes have been gathering since April outside Cannon Ball — a town in south-central North Dakota, near the South Dakota border — to protest the Dakota Access pipeline. Starting with members of the Standing Rock Sioux Tribe, the protest has since grown to several hundred people (estimates vary), most of them from Native American tribes across the country.

Members of the Standing Rock Sioux Tribe see the pipeline as a major environmental and cultural threat. They say its route traverses ancestral lands — which are not part of the reservation — where their forebears hunted, fished and were buried. They say historical and cultural reviews of the land where the pipeline will be buried were inadequate. They also worry about catastrophic environmental damage if the pipeline were to break near where it crosses under the Missouri River.

But pipeline spills and ruptures occur regularly. Sometimes the leaks are small, and sometimes they are catastrophic gushers. In 2013, a Tesoro Logistics pipeline in North Dakota broke open and spilled 865,000 gallons of oil onto a farm. In 2010, an Enbridge Energy pipeline dumped more than 843,000 gallons of oil into the Kalamazoo River in Michigan, resulting in a cleanup that lasted years and cost more than a billion dollars, according to Inside Climate News. 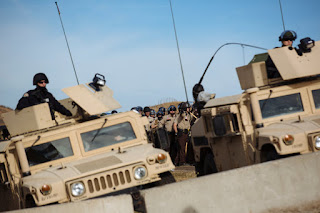 “We need our state and federal governments to bring justice and peace to our lands, not the force of armored vehicles,” said Dave Archambault II, the chairman of the Standing Rock Sioux tribe.

“We have repeatedly seen a disproportionate response from law enforcement to water protectors’ nonviolent exercise of their constitutional rights.”


COMMENT FROM AN AMERICAN INDIAN ABOUT THE PIPELINE (with reference to the Globalists and President Elect Trump):

I am Lenape Indian, God bless you Steve, but you must listen to your heart and mother earth, and God. You were sent there for a purpose. The oil industry is really Getty out of hand all over the US. We live here in NJ and off shore drilling is hear [here] with neighborhoods fighting the pipelines through their neighborhoods. Oklahoma fracking has caused earthquakes the list goes on. This stand represents more then just the American Indians, it what happening to America by the Globalist. And I cannot help but think that their military forces their also are trying to breakup this self governing Indian nation within the US to fit the Globalist Agenda. If Trump wants to make American Great Again he begin hear by doing the right thing, by protecting and preserving their heritage and water. investments or not. How can these men sleep well at night doing these human indignities to peaceful people. Evil will not prevail and their money will be made by blood not by hard working Americans.﻿

**Ancient Native Prophecy of the Black Snake is happening at this very moment. This is number 8 of 9 Hopi & Lakota Prophecies. The first 7 have all come into fruition. It is of the utmost importance that you watch, share and get involved now for the future of our water and all of humanity is at stake right now.
Right now thousands of natives and others have come together to stop the black snake Dakota Access Pipeline from crossing over the Missouri river into the land of the Lakota Indians. According to prophecy if the black snake crosses the river into the land the waters will be poisoned and it will mark off the end of the world. They do not call themselves protestors but instead they are the water protectors. They are protecting your water and your future so you must not sit there, you must get involved. If you at all care about the future of your children and grandchildren.

Don't believe the mainstream media. All they do is lie.