NOW THAT THE YOM TOVIM HAVE SLID INTO RECENT MEMORY, AND THE TUMULTUOUS US ELECTION IS OVER, AND WHILE PEOPLE ARE SPECULATING OVER WHAT/WHO WILL BE IN THE NEW ADMINISTRATION OVER THERE, WE IN ERETZ YISRAEL ARE AWAITING THE RAINS. PRAYING FOR RAIN IS THE ESSENCE OF THE LAND OF ISRAEL.


IN ISRAEL, THE PRAYER FOR ACTUAL RAIN BEGINS 15 DAYS AFTER SHEMINI ATZERET (7 MARCHESHVAN), ALLOWING ENOUGH TIME FOR EVEN THE JEWS LIVING NEAR THE EUPHRATES TO RETURN HOME AFTER WALKING TO JERUSALEM FOR THE FESTIVAL.


"I will send rain on your land in its season, both autumn and spring rains, so that you may gather in your grain, new wine and oil.”
Deuteronomy 11:14
The day of rain is greater than the resurrection of the dead, because the resurrection of the dead benefits only the righteous, but rain benefits both the righteous and the unrighteous. (Babylonian Talmud, Ta'anit 7a)

“On the 3rd of Marcheshvan we pray for rain; Rabban Gamliel says, on the 7th thereon, fifteen days after the Festival [Sukkot] ends, so that the last Jew can reach the River Euphrates” (Ta’anit 1:3). The Talmud specifies that in this dispute, “the halakhah follows Rabban Gamliel” (Ta’anit 10a). Even though the rainy season in Israel should ideally begin immediately after Sukkot, we delay praying for rain to give time for the last Jewish pilgrim who had come to Israel for Sukkot to reach the River Euphrates, so that their journey home should not be made unduly uncomfortable or dangerous by muddy roads and swollen rivers (following Rabbi Ovadiah of Bartinura’s commentary to the Mishnah ad. loc.).

The Tosafot Yom Tov (commentary to the Mishnah by Rabbi Yom-Tov Lipmann ben Natan ha-Levi Heller, central and eastern Europe, 1578-1654) adds: “Because sometimes they would tarry a little in Jerusalem, until the entire Festival had finished”.

And then the Talmud notes the exception: “However, in the exile, [we pray for rain] sixty days after the Autumn equinox” (Ta’anit 10a).

Rabbi Ovadiah of Bartinura concurs (commentary to Mishnah Ta’anit 1:3): “All this applies in the Land of Israel; however in the exile, they only begin praying for rain sixty days after the Autumn equinox”. And indeed, this is the halakhah in practice (Shulchan Aruch, Orach Chaim 117:1; Kitzur Shulchan Aruch 19:5).

The Talmud (Ta’anit 10a) explains that they would start praying for rain sixty days after the Autumn equinox because that was the time when Babylon needed its rainy season to begin.

And about other countries whose rainy season does not begin at the same time of the year? Rashi (commentary to Ta’anit 10a, s.v. tatai lo ba’u maya), the Ritv”a (Chidushai ha-Ritv”a to Ta’anit 10a, s.v. tanya chanaya), and other commentators explain that the entire exile follows Babylonian practice. The Rosh (Rabbi Asher ben Yechi’el, Germany and Spain, c.1250-1328) tried to change this practice, such that Jews wherever they may be would pray for rain in the season that their host countries would need it. However, great though the Rosh indisputably was, the opposition was so determined that he did not succeed in persuading Jewry to change the ancient practice.

It is no coincidence that the single most central declaration of Judaism, the Shema, includes G-d’s promise that “if you diligently hearken to My mitzvot…then I will grant the rain of your Land in its appropriate season – the first rain and the last rain – so you will gather in your grain, your wine, and your oil” (Deuteronomy 11:13-14).

This is the direct continuation of the depiction of the Land of Israel, scant weeks before entering it:

“The Land to which you are coming to inherit is not like the land of Egypt which you have left, in which you can sow your seed and water it on foot like a vegetable garden. The Land to which you are passing to inherit is a Land of mountains and valleys; you will drink water from the rain of heaven. It is a Land which HaShem your G-d constantly looks out for; HaShem your G-d’s eyes are upon it from the beginning of the year until the end of the year” (Deuteronomy 11:10-12).

So much more can be read HERE

Blessed are You, Lord our G‑d, King of the universe, who remembers the covenant, and is faithful to His covenant, and keeps His promise.

Roy G. Biv is one of Israel’s most beloved rainy-season visitors, and oh what a colorful character he is! 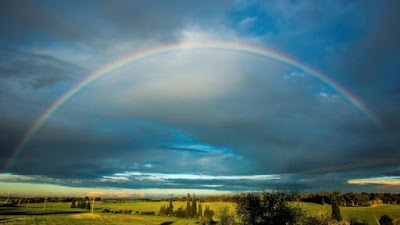 Roy. G. Biv, of course, is the mnemonic that American schoolchildren learn to remember the spectrum of the rainbow: red, orange, yellow, green, blue, indigo and violet. The arc of color is caused by reflection, refraction and dispersion of light as it passes into and out of water droplets under specific conditions. 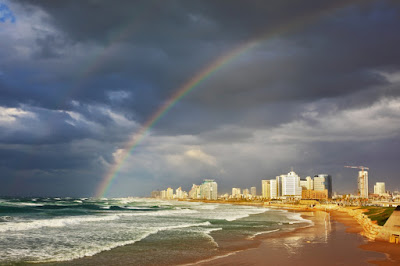 “In order to get a nice rainbow you need two essential conditions, one relatively simple – rainfall, and the other more difficult — sun at the same time as the rain,” Alpert tells ISRAEL21c. “The beginning and the end of the rainy season frequently have these conditions of sporadic rainfall, and this is particularly true for the subtropical belt in which Israel is located.”

Rainbows also depend on two additional microscale conditions: strong solar rays and large raindrops — both found in Israel, he adds.

“Large raindrops do not exist normally in higher latitudes because of colder temperatures and cloud cover, so rainbows are much rarer in Europe. And in the tropics, you rarely have solar radiation even though you have large drops,” says Alpert, who published a study in the journal of the American Meteorological Society in 1990 on the uniqueness of Jerusalem’s climate, including its big raindrops. 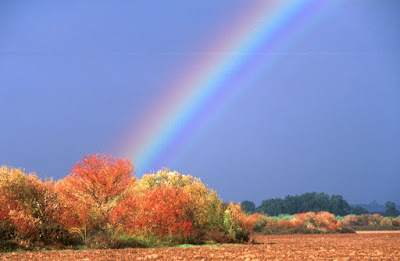 Alpert says you’re most likely to see rainbows on the edge of Israel’s desert areas and between Tel Aviv and Beersheva. 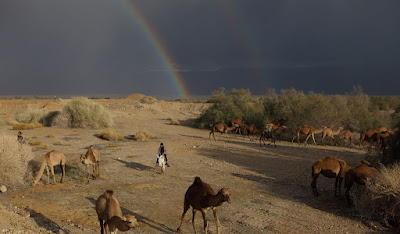 Rainbow over the Galilee village of Kafr Cana. Image via Shutterstock.com 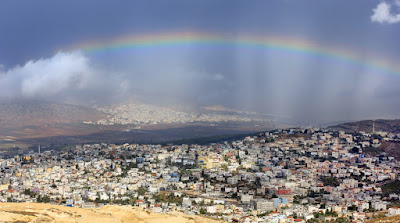 In the case of a single rainbow, the arch shape is centered 42 degrees above the horizon. Alpert says sometimes double or even triple rainbows appear; with a double rainbow, the intensity is weaker, the angle is different and the colors appear in the opposite order. 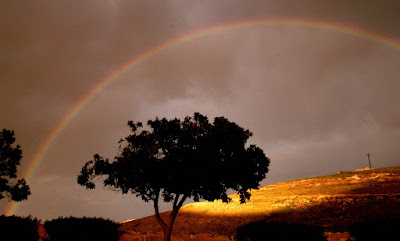