Close Encounter of a Natural Kind 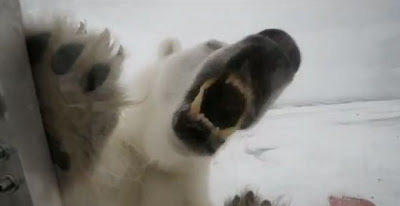 A BBC cameraman was in the wild documenting a hungry polar bear’s eating habits when the animal diverted away from a seal’s hole toward the cameraman’s enclosed cart instead.

Although unfortunate to not witness the bear seeking out its natural prey– something we’ve all probably seen on a nature documentary — Gordon Buchanan was able to capture more unique footage. The bear saunters up to the cart where Buchanan is filming and he becomes increasingly nervous and excited.

Source: Almost being eaten by a Polar Bear
Posted by Neshama at 8:55 AM