Hurricane hits half an island?
What about the Dominican Republic?
Hilary Clinton does not realize the prophetic portent of her words: "Biblical Damage"
Haiti earthquake:
No food, no water... and gutters running with blood
'Biblical damage' is on par with the 2004 Asian tsunami ...
WHY?
A large five-story UN Facility .......... and .............. the Catholic Church Archbishop of the Archdiocese of Port-au-Prince ... and this is one of the poorest .... they allowed these poor people to live in 'hell'.
WHY? 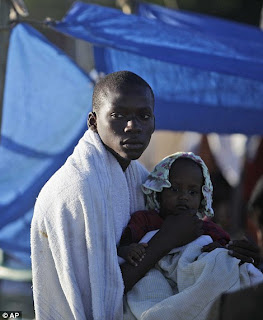 Those with the misfortune to be born in Haiti - part of the island of Hispaniola, shared with the Dominican Republic - have long endured a living hell.

With one in ten under-40s infected with HIV, and millions living in squalor and destitution, thousands try to flee each year to the U.S. by hanging on to anything that will float. While hurricanes, floods and earthquakes have all devastated the landscape over the years, the biggest threat has come from humans.

Successive dictators have raped, murdered and even reputedly eaten their enemies. Described by one commentator as an 'international crime scene' rather than a country, Haiti became infamous around the world during the reign of Francois 'Papa Doc' Duvalier, a former doctor who murdered 100,000 people and formed a private band of killers called the Tonton Macoutes. Wearing their trademark mirrored sunglasses and designer T-shirts, these murderers and cannibals were named after a terrifying bogeyman from Haitian mythology, who carried off naughty children into slavery.