There Are Only Four Personality Types, Psychologists Say

The rough and ready, the bold and beautiful and the teen humanitarian will be appalled to learn that they don’t exist, according to new data

Attempts to classify “personality type” probably go back to the cave. Co-author Prof. William Revelle says attempts date back at least to Hippocrates, the physician who lived around 2,400 years ago (460 B.C.E. to 370 B.C.E.), who probably wasn’t the first to mournfully note that “life is short.” However, Revelle explains, previous scientific literature found the attempts to classify personality type to be balderdash. “Now, these data show there are higher densities of certain personality types,” he sums up.

Actually the study looks at a number of different questionnaires from different sources, developed over decades, one being the BBC’s Big Personality Test datasets. The tests had between 44 and 300 questions, say the researchers.

It is true that all 1.5 million respondents are surfers, which is one constraint on the conclusions. “People voluntarily take the online quizzes attracted by the opportunity to receive feedback about their own personality,” writes the team.

That’s a downside. But there’s an upside in the sheer vastness of the global online population. It is the biggest pool in history.

“The thing that is really, really cool is that a study with a dataset this large would not have been possible before the web,” Amaral says. “Previously, maybe researchers would recruit undergrads on campus, and maybe get a few hundred people. Now, we have all these online resources available, and now data is being shared.”

The personality types are based on the five widely accepted basic personality traits: neuroticism, extraversion, openness, agreeableness and conscientiousness. With the help of mathematics, four clusters emerged. We quote: 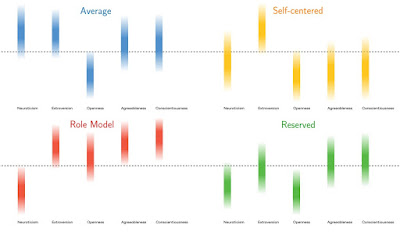 Average: More neurotic and extroverted than the other types, not very open. The team says women are more likely than men to fall into the Average type. The team also thinks most people fall into this category, which makes “average” a good name for it.

Reserved: Emotionally stable, not open and not neurotic. Don’t look to them to dance on the desk at offices parties: they are likely to be “somewhat agreeable and conscientious.”

Role Models: Score low on neuroticism and high in all the other traits. “The likelihood that someone is a role model increases dramatically with age,” writes the team. More women than men are likely to be role models.

Then there’s everybody who isn’t you:

Self-Centered: Very extroverted, and below average in openness, agreeableness and conscientiousness. “These are people you don’t want to hang out with,” says Revelle. Both men and women become much less self-centered with age, as anybody who’s ever met children and teenagers, and other people, will have noticed.

And there you have it. “I like data, and I believe these results,” Revelle, a self-described skeptic at the onset, stated. “The methodology is the main part of the paper’s contribution to science.”
For dessert, here is another unexpected finding. To test the accuracy of the clusters, the researchers used a notoriously self-centered group – teenaged boys – to validate their information.

“We know teen boys behave in self-centered ways,” Amaral said. “If the data were correct and sifted for demographics, they would turn out to be the biggest cluster of people.”

Yup: Teen boys were overrepresented in the Self-Centered group. Teen girls over 15 were vastly underrepresented. Make of that what you will.

And the Expert is: Haaretz and Northwestern University team led by Luís Amaral of the McCormick School of Engineering reported Monday in Nature Human Behavior.
Posted by Neshama at 10:01 AM