GOOGLE EARTH Finds a Strange Object in Arizona Desert. How does this fit into other strange "citings" observed by Sky Watch 5 from Shirat Devorah and the happenings on Devash's Tracking Nibiru if anything. Maybe it's not what it seems to be? Maybe its just a water sistern? OR MAYBE THIS IS AN ESCAPE HATCH OF SORTS FOR THE NWO to escape into when Nibiru arrives?


A video recorded by Google Earth cameras appears to have captured what some viewers believe to be a 'crashed flying saucer' in an Arizona mountain range.

The zoomed-in image appears to show a large black circular-shaped object, lying in the middle of the deserted landscape. 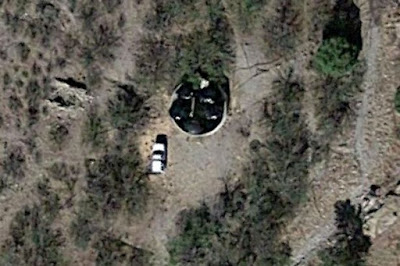 A white truck is parked directly next to the alleged craft, which appears to be in the middle of the mountains, close to New Mexico.

Tyler, from Secure Team, who uploaded the video to YouTube, also claims that the craft had landed in a 'no-fly' zone. "What really interests me is not only the military no-fly restriction put on this exact area, but the SECOND no-fly restriction literally placed dead-centre on the location of this object. But not everyone is convinced by the footage.

One viewer wrote: "I managed to find this on Google Earth , and took a better look at it, there are some old disintegrating structures nearby and what looks like a solar panel, I would say it's a water cistern. "It's also right in the heart of Swaggart Spring. And it's not a no fly zone.﻿"


It’s highly unlikely Earth is the only planet where life is found. 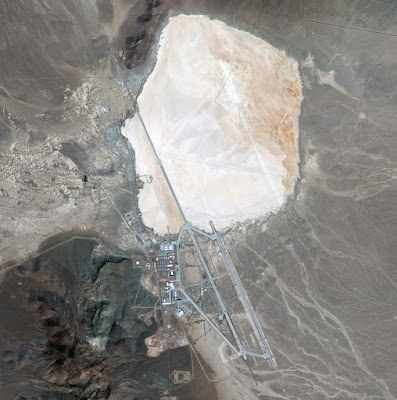 It's highly unlikely the Earth is the only planet where life is found, says president of Association for Scientific Study of Anomalous Phenomena.

From what has been leaked, it does seem there is something at Area 51. Whatever the mystery is, it could well involve aliens .

If we argue statistically for the existence of external life forms, it would seem very unlikely for our earth to be the only inhabited planet.

The ages of other planets would suggest if life has developed there it would have been established many light years before us.

Of course, that's what they want you to believe. There is no life as we know it on any other planet (maybe organisms but that's it).

We Jews do not believe in all this - all very, very sophisticated man-made trickery.