What is happening to our Birds?


What is disturbing the fish under water?
First it was the whales dying on beaches?
And a Giant Squid losing its way in the waters of the Hudson River!
And Whales in Lake Michigan?
Unprecedented Biblical Floods


National Geographic: "A mysterious rain of thousands of dead birds darkened New Year's Eve in Arkansas, and this week similar reports streamed in from Louisiana, Sweden, and elsewhere. But the in-air bird deaths aren't due to some apocalyptic plague or insidious experiment—they happen all the time, scientists say. The recent buzz, it seems, was mainly hatched by media hype."

After a quasi scientific analysis of why birds were dropping from the heavens, and fish were washing up on shore, some commenters to the article has this to say: I am a large fan of National Geographic since being a small child. This is why it is hard for me to say considering my respect of NG, but I must say it nonetheless: The reasons stated in this article are insulting to anyone with a hint of intelligence! I am 46 years old and have seen a lot of fireworks and this has never happened. I was in the US Army and this never happened during the fire of artillary or what have you. For the first time ever, I feel disappointed in what I have always considered to be the highest standards of reporting of nature and science!

Oh come on! Fireworks are a craze here in the Philippines - both legal and illegal. We have ones that would actually create a crater on the ground but we never had an incidence of birds falling down from the sky.

Oh, please! I can't believe 'fireworks' is the best explanation they can come up with. Do they really think we're that stupid? If it were fireworks, wouldn't this be an annual event? Wouldn't it happen every July 4th, as well? I suppose the fish were all startled by the fireworks, too.  I also found this website that theorized that extreme solar flare activity could be the cause due to conflictions with our magnetic field which would throw off the birds navigation.

Dead Birds in China: Birds continue to fall around the world - may be a precursor to a reversal of poles . . . We know that birds navigate by the Earth's magnetic field - if the magnetic field changes, birds may fall. That migratory birds rely on the body's "biological compass" to determine direction is an "open secret", but it is not clear how birds perceive the magnetic field. "Nobody knows how it (the magnetic induction system) works," said Patterson Murray. "The magnetic induction principle is that people understand the nature, at least so far the (principle)."

Anyone ever heard of Phosgene gas? It was used in WW I as a chemical warfare agent. A worker at a plant in Virginia was killed when exposed to the gas, and that happened this year. It also makes people act disoriented. Makes you wonder about Mr. Wheeler [New Years Eve also] too. Oh, and in small amounts Phosgene smells like newly mowed hay, big amounts it can be like chlorine, but not all people will be able to smell it. I just am offering another possibility for large numbers of bird and fish deaths.”

In another National Geographic News article:

“Earth’s north magnetic pole is racing toward Russia at almost 40 miles (64 kilometers) a year due to magnetic changes in the planet’s core, new research says.”

“The magnetic north pole had moved little from the time scientists first located it in 1831. Then in 1904, the pole began shifting northeastward at a steady pace of about 9 miles (15 kilometers) a year.  In 1989 it sped up again, and in 2007 scientists confirmed that the pole is now galloping toward Siberia at 34 to 37 miles (55 to 60 kilometers) a year.”

And a commenter to this article stated:

Tampa Int'l Airport has to change their primary and secondary runway designations because of this event. 1) Are there other airports, worldwide, that will be doing the same thing? 2) Perhaps this phenomenon is what is affecting various birds' inner mechanism which would adversely affect (e.g. dead ones being found around the world) their flying capabilities . . . if this magnetic core shift is occurring, wouldn't it ultimately affect all tides and climatic/seasonal cycles?

Aaron J Hill also found this intriguing in his article, Earth's Magnetic North Pole on the Move. "The magnetic north pole is moving toward Russia “at almost 40 miles (64 kilometers) a year due to magnetic changes in the planet’s core.” Its long-time location is in northern Canada, close to Ellesmere Island. ... Visit his blog to read more. 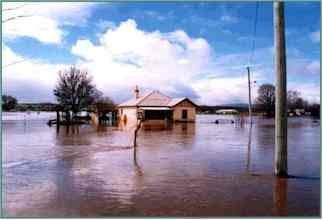 The Australia Bureau of Meteorology warned in mid-December of unusually heavy rains to come, fueled by a strong La Niña pattern of ocean currents this year—the strongest in decades, according to a scientist quoted in New Scientist.

Earthquake in Chile could change Earth’s Axis:
“The magnitude 8.8 earthquake that jolted Chile on Saturday was felt as far away as São Paulo. But NASA scientists are proposing that its repercussions are truly global in a geophysical sense: it likely shifted by Earth's axis about eight centimeters.”
Posted by Neshama at 8:17 PM