The Ramban and Eretz Israel 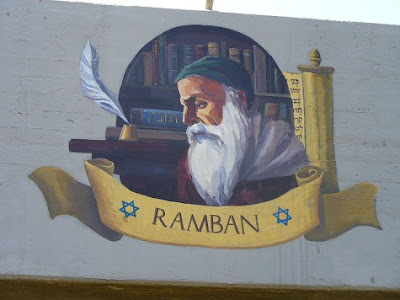 This is a depiction of the Ramban on the wall in Acre, Israel


People occasionally ask, “Where is it written in the Torah that we have to build a State?” Apparently, they are not familiar with the words of the giant Torah authority, the Ramban, who repeatedly stated that we are commanded that the Land of Israel be in our hands, and not in the hands of any other nation:

“We were commanded to inherit this Land which Hashem, Blessed Be He, gave to our Forefathers, to Avraham, Yitzhak, and Yaacov, and not to abandon it to the hands of other nations, or abandon it to desolation. Hashem said to them, ‘To inherit the Land and dwell there, for to you I have given the Land to possess, and you shall inherit the Land that I swore to your Forefathers’ – behold, we are commanded with its conquest in every generation (Ramban, Supplement to Sefer HaMitzvot of the Rambam, Positive Commandment 4).

“This is what our Sages call ‘Milchemet Mitzvah,’ an obligatory war. This Land is not to be left in the hands of the Seven Nations, or in the hands of any other nation, in any generation whatsoever…this is a positive commandment which applies at every time” (Ramban, ibid).

“And the proof that this is a Torah commandment is this – they were told in the matter of the Spies, ‘Go up and conquer the Land as Hashem has said to you. Don’t fear, and don’t be discouraged.’ And further it says, ‘And when Hashem sent you from Kadesh Barnea saying, Go up and possess the Land which I gave you, and you rebelled against

Hashem your G-d, and you did not believe in Me, and did not listen to this command’” (Ibid).

All of the early and later Torah authorities, the Rishonim and Achronim, decide the law in this fashion on the basis of the Ramban that the precept of conquering the Land applies in all generations, and all of them agree that it is a commandment of the Torah (Shuchan Oruch, Pitchei T’shuva , Even HaEzer, 75:6).

Sovereignty over a country means having an army, a government, a justice system, an economic system, etc. By commanding us to rule over the Land of Israel, the Torah commands us to establish a State. Rabbi Kook emphasized that whether sovereignty is brought about by a prime minister, a prophet, a judge, or a king, it is valid Jewish sovereignty when it comes on behalf of Clal Yisrael, the encompassing congregation of Israel. (Mishpat Kohen, 337).

Thus, the State of Israel is a commandment of the Torah. Rabbi Tzvi Yehuda Kook emphasized that, “The intrinsic value of the State is not dependent on the number of observant Jews here. Of course, our aspiration is that all of our people will embrace the Torah and the mitzvot. Nonetheless, the Statehood of Israel is holy, whatever religious level it contains.”

“There are religious Jews who express a type of criticism and say, ‘If the State of Israel were run according to our lifestyle and spirit, then we would accept it. Until then, we abstain from it.’ They talk as if the State does not belong to them. But the truth is that the State belongs to all of us.”

anyone who refuses to recognize the State of Israel does not recognize Hashem’s rule over what takes place in the world.

If the Master of the Universe decided to bring the Jewish People back to the Land of Israel via the vehicle of the State of Israel, who are we to complain or disagree?

Rabbi Kook said that we had to be patient, that Redemption came slowly in gradual stages, little by little (Jerusalem Talmud, Berachot 1:1), and that it would reach perfection with time.

“In the Talmud, our Sages explain that all of the material used in building the Temple became sanctified only after it was set into place. We build with the profane and sanctify afterward (Meilah 14A and B, see Rashi there). This was enacted because our Sages realized that during the construction, workers would sit in the shade of the building to rest from the sun, and thus improperly derive personal benefit from something which had been exclusively dedicated for the use of the Temple. The Beit HaMikdash was built in this fashion, and this is the way the Redemption of Israel develops, in stages, little by little. Just as the stones used in building the Temple were not sanctified at first, so, too, the building of Eretz Yisrael is accomplished by every segment of the Nation, by the righteous and by the less righteous. We build with the secular, even though this causes complications and problems, and little by little all of the various problems will vanish, and the sanctification of Hashem will appear in more and more light.”

As we say in Israel, “Savlenut,” Patience, my friends. Patience.

The Maharal of Prague teaches in Netzaḥ Yisrael that like the orbits of the planets in space and the importance of oxygen for human beings, Hebrew sovereignty over the Land of Israel is a natural necessity built into the system of Creation. When Israel is living as an independent nation in our homeland, the entire world becomes healthy. The heart of humanity is in place and able to channel Divine life and blessing to all existence. It has been in opposition to the laws of nature inherent in Creation for Israel to be separated from our beloved country. Like a ball thrown up in the air that must come down, Am Yisrael must return to sovereignty over our soil. Nature corrects itself as we return home and the Torah now aspires – for the first time in nearly two thousand years – to be lived on a national level that infuses kedusha into every sphere of life. And as nature corrects itself and history progresses forward, our liberation will advance toward the full redemption of humankind. From Reunification of the Nation of Israel with the Land of Israel by Yehuda HaKohen
Posted by Neshama at 1:44 PM

Beautiful article. This is the reason I always admired the Ramban above so many of our Sages (all of whom are holy) because of his love of the Land of Israel. There are two main points which I would like to bring out here: #1: The very religious galut Yehudi is just that; a galut Jew. Also, the ultra religious Jew who seems to love the galut and all that it has benefited (very little) them because they suffered more than benefitted, but still they prefer it & find loopholes in Halacha to take away any guilt. They are the reincarnations of the ten spies and their followers, who would rather have lived in the desert than make their home, Eretz Yisrael.

Point #2 is that when the 'zionist' movement emerged, it was being led and promoted by bolsheviks and Jews who wanted to throw off the 'burden' of Torah and the great Rabbis understood who and what they really were, thus, their disdain for the State. What they seemed not to have realized is that was the beginning of the process of returning home after 2000 years. Everythis is from Shamayim. Today, many of them realize it, but many of the ultra chareidi still cannot accept it
especially living under Torahless rules. They do not care who is in charge as long as it is not a 'Jewish' Torahless government. But, in the end, it will all work out, once the klipah of the state has fallen.
Another matter which never made sense - why did they decide to call it a 'state' rather than just 'Israel'!?

The main point really is that the Torah kept us as a nation through the millenia because we were scattered throughout the world, waiting and yearning to come home to E.Y. Torah is just a guide for life without the Land and E. Y. is real estate (not really, as the Shchinah is always there) without Torah. The two (Torah & E.Y.) are united as one, including, first and foremost, H' and His children, Yisrael. It is all one.