THE WORLD NEEDS TO KNOW 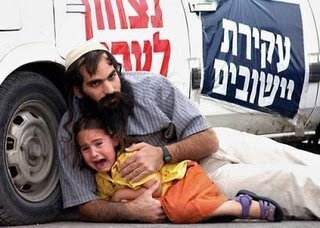 A father taking cover with his son as a rocket hits Sderot
[pic credit vosizneias.com]
"...THE ISRAELI AIR FORCE HAS SUCCESSFULLY KILLED HAMAS COMBATANTS 75% RIGHT ON TARGET. That's got to be the most accurate bombing in world history!"
[mysticalpaths.blogspot.com]

"KNOCKING ON THE ROOF"

Just to give people an idea of how the Israeli Air Force works, they use a method called "knocking on the roof". There are several steps ...

NOW
THE WORLD
NEEDS
TO KNOW THIS!
Unfortunately, I think the world knows this,
but finds it difficult to abandon its ages old ideology.
How sad!
If YOU want to know the TRUTH visit
honestreporting.com
Posted by Neshama at 5:58 PM

Doesn't warning them like this also enable the terrorists to escape?

Avodah, this info is all over, and beside the IDF is now on YouTube and Twitter. Many of those you are worried about are already hopefully among the war casualties.

The trouble comes when Abbas starts demanding "no peace without .........."

I know this info is on youtube, etc. That is irrelevant. Warning terrorists, seconds before you are going to bomb them enables them to escape. Bombing empty building will not bring this war to an end.

There is no such thing as proportionality when it comes to an unprovoked attack from an enemy who places no value on human life and targets Israeli civilians. The only way to win is to break their will to fight and force them to surrender.

War is a horrible ugly thing, to be resorted to only in the last resort, as this war was. The only humanitarian way to fight a war is to win it as quickly as possible.

Israel should warn the residents of Gaza to evacuate whatever part of Gaza they need to bomb and literally flatten it. Maybe then send in ground troops.